Defeating China at the UN, India has been selected as a member of the United Nations's Commission on Status of Women, a body of the Economic and Social Council

Defeating China at the United Nations, India has been selected as a member of the UN's Commission on Status of Women, a body of the Economic and Social Council (ECOSOC). TS Tirumurti, permanent representative of India to the United Nations took to Twitter and announced that India has won a "seat in prestigious ECOSOC body!"

"It's a ringing endorsement of our commitment to promote gender equality and women's empowerment in all our endeavours. We thank member states for their support," he said.

India elected Member of Commission on Status of Women #CSW. It’s a ringing endorsement of our commitment to promote gender equality and women’s empowerment in all our endeavours.

We thank member states for their support. @MEAIndia pic.twitter.com/C7cKrMxzOV 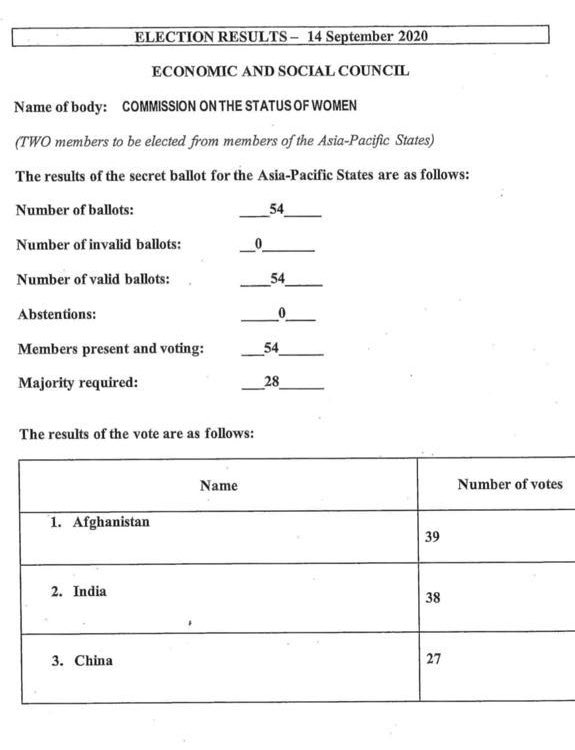 India, Afghanistan and China had contested the elections to the Commission on Status of Women. Even as India and Afghanistan won the ballot among the 54 members, China could not cross the half-way mark. This year is the 25th anniversary of the famous Beijing World Conference on Women (1995). India will be a member of United Nation's Commission on Status of Women for four years, 2021 to '25.

Meanwhile, in a veiled reference to Pakistan and China, India on Monday said that when some countries were taking advantage of COVID-19 pandemic to enhance terrorism or adopt aggressive policies, it has been rushing medical supplies and strengthen national health capacities to mitigate the socio-economic impact on vulnerable countries. TS Tirumurti made the remarks at the commemoration of the third anniversary of the India-UN Development Partnership Fund.

PR to UN @ambtstirumurti at says when some countries are taking advantage of Covid to enhance terrorism or adopt aggressive policies, India’s answer is to rush medical supplies, strengthen national health capacity or mitigate socio-eco impacts on vulnerable countries. pic.twitter.com/hzAkrv5KUf

"India gives priority to sustainability and demand-driven projects, and shuns efforts to impose conditionalities or create indebtedness or constrain developmental space of developing countries," he added. The envoy said that the essence of India's development partnership was articulated by Swami Vivekananda. "Each nation must give in order to live. When you give, you will have life; when you receive, you must pay for it by giving to all others," he quoted Swami Vivekananda as saying.

READ | Cops said they are under govt pressure: Republic reporter Anuj after 6 days in custody

WE RECOMMEND
2 weeks ago
CPI to hold 'All India protest' to highlight state of country's economy; slams Finance Min
2 weeks ago
PUBG Mobile's market revenue in India; countries that followed India with the ban and more
2 weeks ago
Republic's reporter Anuj and crew granted bail by court after being detained for 138 hours
2 weeks ago
Xi risked all with aggressive moves on India but 'unexpectedly flopped'; 'brutal purge' next: Report
2 weeks ago
Vitality T20 Blast MID vs SUR live streaming in India, pitch & weather report, predictions