Realistic cakes by Bakery shop from the kidney to rubic's cube, have taken the internet by storm, some call their skills, 'outstanding', other find it 'creepy'.

A mother-daughter duo's realistic cakes from the kidney to rubik's cube, have taken the internet by storm. As the Valentine's Day is just around the corner, the duo also baked a heart-shaped cake to math-up the occasion, however, it looked like the real human heart. While most netizens were seen sharing the images of the cakes because they looked 'creepy' but some were also seen appreciating their baking skills and the details on the cake.

According to the Facebook page, the home bakery is located in Texas, and the images of their 'baking masterpieces' have travelled to various social media platforms. They have also claimed that the cakes are hand sculpted and recipes are also made from scratch. The page already has thousands of likes and the duo also posts short time-lapse videos of them giving final touches to the cake. They bake only based on orders and have also mentioned that certain cakes take several days.

However, their realistic cakes have surely left netizens in splits. While there themed cakes ranging from human organs to real monsters are making netizens wish they lived closer to Texas in order to get them delivered, others called it 'weird'. The comments had varied reactions as well, one Facebook user started off by saying it was 'outstanding' but then added 'I wouldn't eat that'. Some of the Facebook users also asked for the price of the 'heart-shaped' cake which according to the comments by 'Crabby cakes' is $70.

One Facebook user wrote, “oh my goodness! Wish you were closer... in Virginia. I so would buy one of these.”

Other internet user commented on the heart-shaped cake and said, “ I am a nurse and I approve this cake. You did an amazing job.” 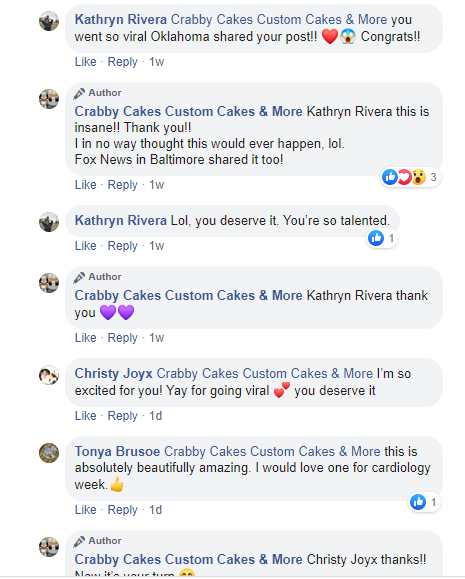 While this duo makes realistic cakes in the United States, another baker based in United Kingdom creates cakes out of everyday objects. The owner of the bakeware shop called The Bake King put together his best inventions, which include fruit cakes, like bananas, apples, avocados and oranges. Ben Cullen who operated the cake making business also has his own social media channel in which he uploaded some interesting briefs, including pints of beer, animals like a turtle or even an incredible realistic version of Simba. He recently also created a full turkey roast dinner but in the form of cake.