US model Kaylen Ward who raised $720,000 for Australia's battle with raging bushfires has been 'bullied' and 'harassed' by the people on the internet.

US model Kaylen Ward who raised $720,000 for Australia's battle with raging bushfires has been 'bullied' and 'harassed' by the people on the internet. In a peculiar trade, Ward sent her nudes to the people who donated at least $10 and sent her a confirmation. However, the 'noble deed' soon went downhill as Ward claims that people 'made the internet a dark place' for her. Not only did people leak her explicit selfies without her consent, but also sent her harassing messages.

Just saying y’all bully and harass people on social media but y’all advocate for suicide prevention and shit. Y’all wonder why so many people kill themselves yet you make the internet unbearable for them.
You guys have made the internet such a dark place for me.

Ward goes on to say that she is 'just a 20-year-old' and asked 'everyone' to leave her alone amid the recent wave of popularity. The US model, who decided to take a stand for the angry wildfires, has been disowned by her family, and her pictures have made their way to different social media profiles. Ward's two Instagram accounts have been deactivated while several other fake profiles have also been made by people making internet 'unbearable' for Ward.

I am a 20 year old girl. I am just one person. Think about how the shit you do affects me. Now think about millions of people doing things to me all at once. Leave me ALONE.

The model has decided not to stop the donations but gave a new direction. On January 5, she announced about her car which she wishes to donate to a family who is 'in desperate need of help'. Again, she asked her followers to spread her 'new message' to the ones who are in dire need of a car and she could help them. The netizens swiftly gave her titles like 'woman of the year' and other applauded the 'sex-worker' for 'single-handedly' saving Australia. One of the Twitter users also called  Ward a 'charity Queen'. 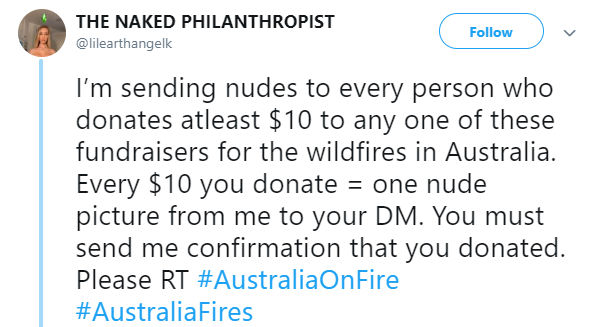 I have decided to continue the donations in a new direction by giving someone in the LA area a car. I have a 2009 Ford Fushion that I would like to give to a family who is in desperate need of help. Please let me know if you know anyone who could benefit from this.

Read - Australia: Images Show Hills 'glowing In The Dark' Due To Bushfires