NASA Earth has revealed horrific images of Australia bushfires captured by a satellite, showing the island continent covered in a thick blanket of smoke.

The earth satellite of the National Aeronautics and Space Administration (NASA) has revealed 'heartbreaking' images of Australia bushfires showing the island continent covered in a thick blanket of smoke. As Australia battles the worst wildfires, NASA Earth captured the colour image of the southeastern part of the country on January 4. The white patches of smoke will apparently become 'pyrocumulonimbus' clouds created by heat rising from the fire. Earlier, NASA had also shown the same blanket of smoke on January 3 saying it turned 'day to night'.

Read -  Australia: Teenagers Fill Car With Koalas To Save Them From Bushfires

When smoke turns day to night.

The record-setting deadly fires in Australia were also captured by NASA on January 1, showing the difference of weather from July 24, last year. The Operational Land Imager on Landsat 8 had acquired the same area in colour on different dates. The latest image was captured by the Moderate Resolution Imaging Spectroradiometer on NASA's Aqua satellite proves the extreme climate conditions predicted by forecasters over the last weekend. 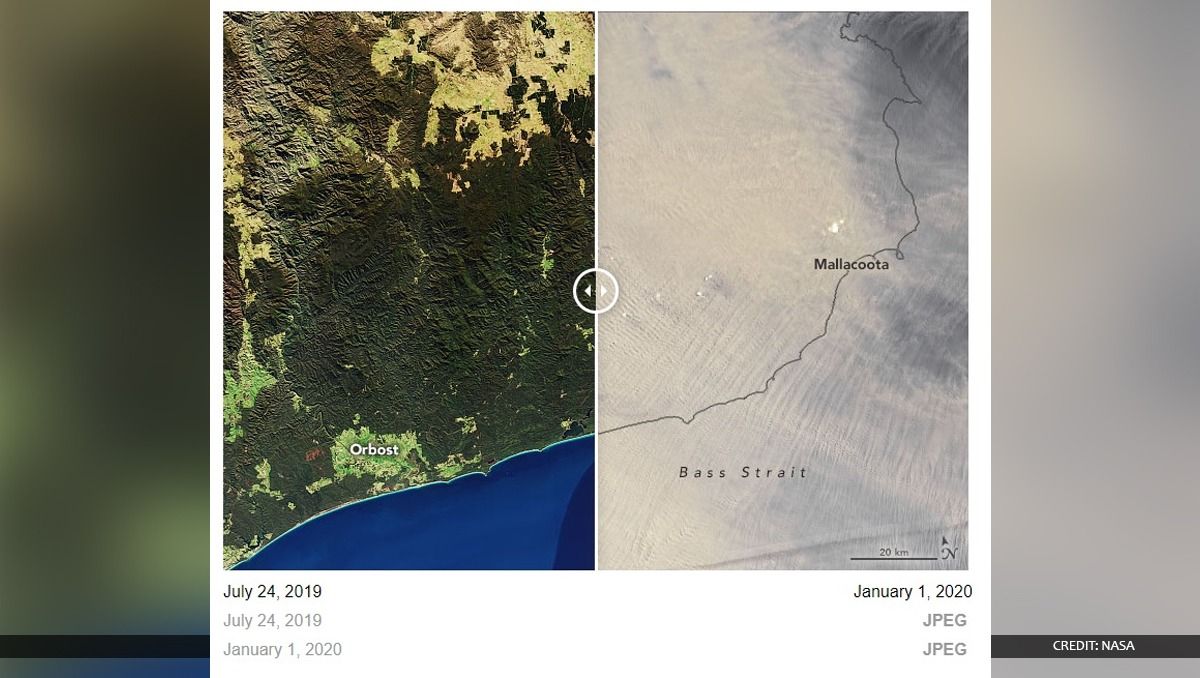 More than 135 bushfires are still burning across the state, including almost 70 that were uncontained. The Rural Fire Service is warning the rain won’t put out the largest and most dangerous blazes before conditions deteriorate again this week. Australia’s capital, Canberra, had the worst air quality of any major city in the world on Monday morning. The Department of Home Affairs, which is responsible for coordinating the country’s response to disasters, told all non-critical staff to stay at home because of the abysmal air quality.

The challenging times in Australia have generated a wave of concern worldwide with people sharing 'heartbreaking' pictures of the 'massacre'. Celebrities like Selena Gomez, Pink, Keith Urban, Nicole Kidman among others have contributed their funds to help Australia in its battle with nature and also urged others to donate and 'make a difference'.