The Canadian oil-services company, X-Site Energy Services, apologized for the sticker that showed their logo under as sexualized image targeting Greta Thunberg.

The Canadian oil-services company, X-Site Energy Services, on March 2 apologised for the sticker that showed their logo under as sexualized image targeting teen climate activist Greta Thunberg. The image which showed a woman with 'Greta' written on her lower back and the logo of X-site Energy Services on the bottom was also criticised worldwide. However, the oil-services company in a statement said that they 'deeply regret the pain' they may have caused.

The statement released on the official website read, “We recognize that it is not enough to apologize for the image associated with our company logo on the decals that circulated last week. This does not reflect the values of this company on our employees, and we deeply regret the pain we may have caused”.

The statement further read, “We are taking action to condemn this image and its publication and are committed to recovering and destroying the decals we distributed. Managements accepts full responsibility and effective immediately, has made organizational changes to reflect this”. 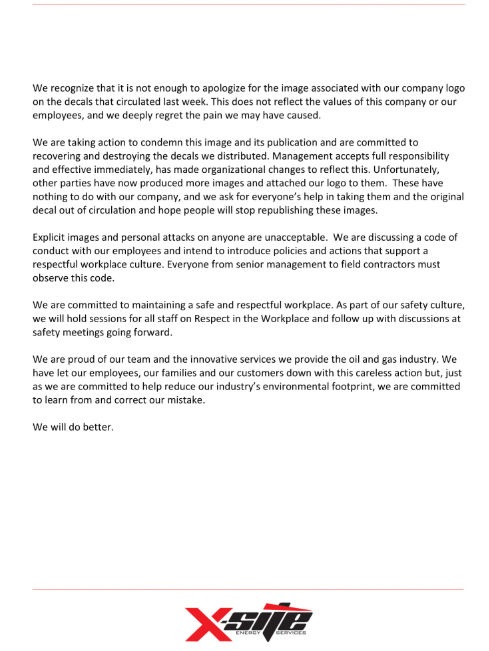 According to international media reports, the Alberta-based company had initially denied involvement in the sticker, however, the recent statement said that the company is now discussing 'code of conduct' with their employees. The oil-services company further also intend to introduce policies and actions that support a respectful workplace culture and urged each every employee, from senior management to field contractors, to observe the code. The firm said, “Just as we are committed to helping reduce our industry's environmental footprint, we are committed to learn from and correct our mistake”.

The 17-year-old has inspired millions of young people around the world, although, she has been criticised and abused for her uncompromising attitude. However, Thunberg said that her critics are now getting 'more desperate'. She also said that such acts represent that activists are 'winning'.

At a recent rally, she also reaffirmed that she won't be silenced when the 'world is on fire'. According to international reports, more than 20,000 people attended the rally in the southwestern English city to see the 17-year-old environmentalist who has demanded action from governments around the world over climate crisis and claimed “we are the change”. Thunberg has also managed to capture the imagination of many young people with impassioned demands for world leaders to take urgent action.

READ: 'Won't Be Silent While The World Is On Fire,' Roars Greta Thunberg At UK Climate Rally