A viral picture of a bride-to-be having tied her newborn baby to her wedding gown before walking down the aisle has re-emerged online. Here's the story

A viral picture of a bride-to-be having tied her newborn baby to her wedding gown before walking down the aisle has re-emerged online. The picture was shared on Reddit, and in it, the woman can be seen amid their other guests, her newborn baby tied to the hem of her wedding dress, seemingly being dragged along behind. As the woman walked to the dais, guests at the wedding could be seen staring intently at what was unfolding before them

Truth behind the viral picture

The picture has gone viral ever since it was shared on a group 'r/wedding shaming' that has more than 70,000 members. According to reports, the picture was taken at Tennessee Nuptials in 2014 but it attracted a lot of eyeballs after it was reshared on Reddit three days ago. The picture outraged many on the platform, with many wanting to know the reasoning behind thinking that this was appropriate. 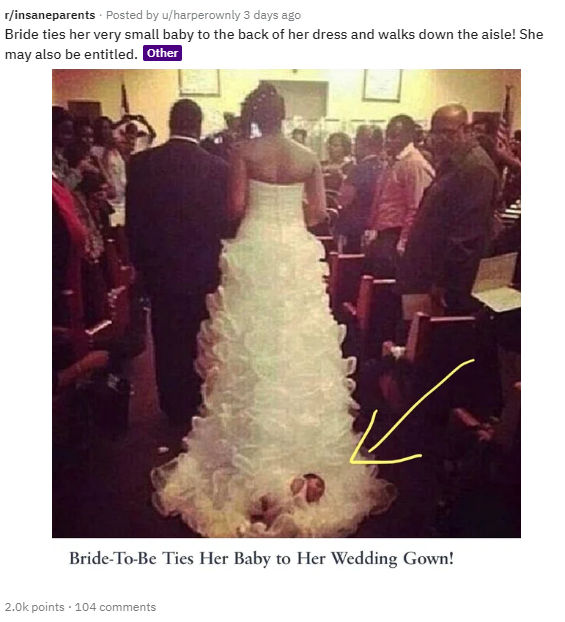 A user on Reddit commented, "Oh God, this is so many years old. I think that it keeps coming up because it is just so horrifying to think of doing this to a one-month-old. Ok, any age really, but at one month???" While another user wrote, "I remember this story. She said she wanted to include the baby in a creative way. Which is an odd way of saying "I’m desperate for social media attention".

According to reports that cite the bride's cousin, the baby was not dragged and was laid there for a photo. The infant was picked up after the photo of the couple coming into the Church was taken. After the post went viral on social media, Shona Carter-Brooks, the woman in the picture, issued a statement where she insisted that the one-month-old baby was awake and secure on her train. Shona also took a jibe at trolls who judged her without having full information about the viral picture.