BJP leader & Rajya Sabha MP Subramanian Swamy has said he will sue a senior UN official, who described alleged comments about Muslims attributed to him.

BJP leader and Rajya Sabha MP Subramanian Swamy on Thursday said that he will sue a senior UN official who described alleged comments attributed to him as "extremely alarming", saying the diplomat's remarks are slander and a blatant lie.

Earlier this week, Under-Secretary-General Adama Dieng, United Nations Special Adviser on the Prevention of Genocide, in a note to the media expressed concern over reports of "increased hate speech and discrimination" against minority communities in India since the adoption of the Citizenship Amendment Act in December 2019.

In the letter, Dieng made a reference to Dr Swamy, saying statements such as those expressed by him, that all people are not equal, and that "Muslims are not in an equal category as others are extremely alarming."

'I will take steps to sue him in court'

Swamy hit back at Dieng's assertion, in a tweet on May 19 said that the UN official "slandered me in a press release in New York saying I had said in an interview to a Pakistani owned TV channel that Muslims are not equal to Hindus in Indian Constitution. This is a blatant lie so I will take steps to sue him in court."

Responding to a tweet, Swamy wrote, "I need practice so I will enjoy suing in court a United Nation official for defamatory lies."

Swamy in a tweet on Thursday said that in a letter to the Foreign Secretary (Harsh Vardhan Shringla), he has expressed his intention to prosecute for defamation Dieng for relying on a Pakistani owned TV's cut and paste interview, to allege that "I said Muslims don't have equal rights with Hindus in India."

My letter to FS MEA stating that I intend to prosecute for defamation the UN Under Secretary General Mr. Adama Dien for relying on a Pakistani owned TV's cut and paste interview, to allege that I said Muslims don't have equal rights with Hindus in India. 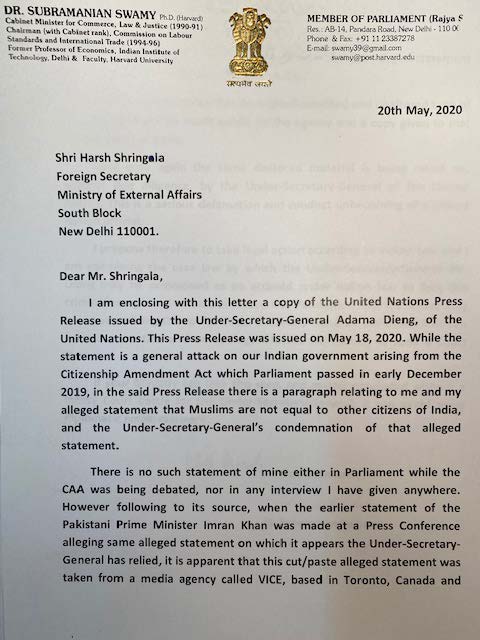 He said a legal notice will very soon be served on Dien. Dien, a Senegalese international lawyer, is a former registrar of the International Criminal Tribunal for Rwanda.

READ | Subramanian Swamy binges web series 'thanks to lockdown', says it has lessons for India