The Philharmonic Dining Rooms in Liverpool is the first Victorian pub in England to be given the Grade 1 status, according to a public body, Historic England.

The Philharmonic Dining Rooms in Liverpool is the first Victorian pub in England to be given the Grade 1 status, according to a public body, Historic England. Additionally, ten other pubs have also had their status updated to include details of their interiors. Historic England claimed that the Philharmonic is regarded as a "cathedral among pubs" for its grand style and was one among the most spectacular pubs to be constructed in the golden age of pub building at the end of the 19th century. 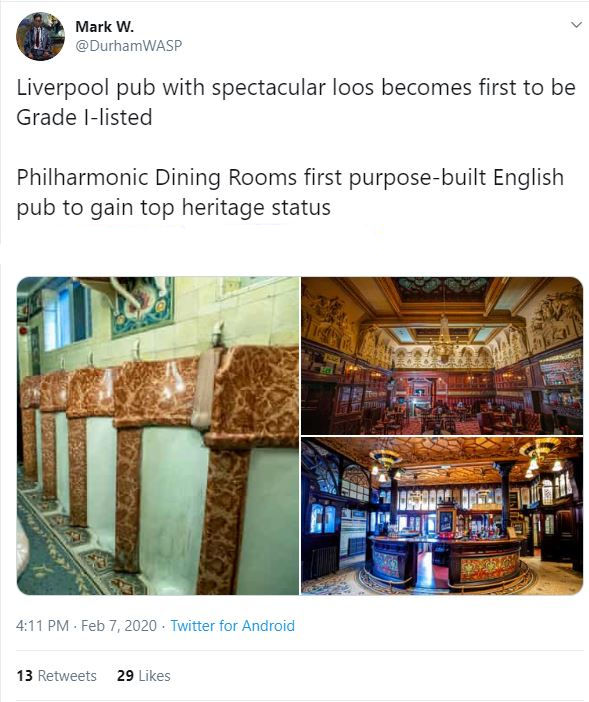 READ: Bollywood Nights In Hyderabad In These Pubs Are A Rage; Details Inside

The Philharmonic Dining Rooms pub #Liverpool , just made Grade I-listed building. Built 1898 for brewer Richard Cain, who created public houses of great beauty, its decorative Art Nouveau gates are some of best metalwork in UK. I used to lunch there. The Gents loo is amazing😊 pic.twitter.com/540IDTtX1k

The pub was constructed between 1898 and 1900 by architect Walter W Thomas and now, at long last, it has been officially deemed on a par with the Queen’s London residence. Sir Paul McCartney, former Beetles star played a surprise show at the pub in 2018 while recording an episode of Carpool Karaoke with James Corden. It has recently been included in the 2.5  of protected historic buildings to have the highest grade, a list which includes Liverpool's Anglican cathedral as well as Buckingham Palace and Chatsworth. Two other pubs in Liverpool have also been evaluated to have details of their interiors included in their listed status description.

A Liverpool pub's been given Grade One Listed status. It puts the Philharmonic Dining Rooms on a par with the city's Anglican cathedral and Buckingham Palace. 'The Phil' is the first ever Victorian purpose-built pub to be given the status #HeartNews pic.twitter.com/u5yOkxwc5y

READ: New Year 2020: Pubs And Clubs You Can Dance The Night Away In Hyderabad This NYE