Stephen Fry shares a shocking revelation about the UK election map and the internet finds it perfect. The map looks eerily similar to a Simpson's character.

After the Landslide victory by the Conservatives against the Tories while retaining the majority in the Parliament, Stephen Fry has likened Britain's new electoral map to a Simpsons Character and the internet just finds it perfect. Stephen Fry is being hailed as a national treasure by Twitteratis after he compared United Kingdom's new electoral map to Simpsons villain Mr Burns.

In the tweet shared by Fry, he claims that his friend Edgar Phillips has an artists eye and has seen something shocking in the electoral map of the UK. 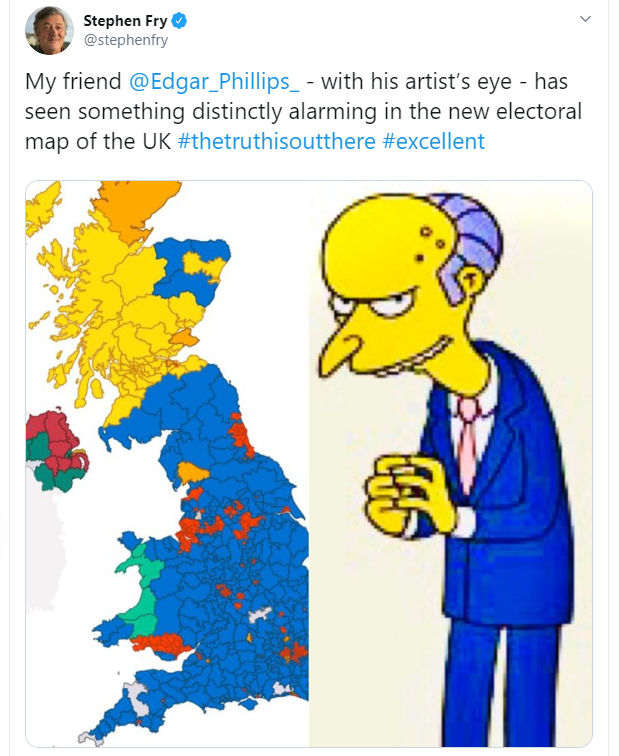 Read: Myles Stephenson Reveals His Nan Died After Waiting For Him To Return From I’m A Celebrity

After that Stephen Fry shared another tweet that seemed to reinforce his first point. The electoral map shows a majority of blue that obviously represents the Conservative party with its overwhelming majority. On the other hand, is Mr Burns's head that is depicted by the yellow of the Scottish National Party that won a majority of seats in Scotland with a little blue at the top acting as the small amount of hair on Mr Burns's head. 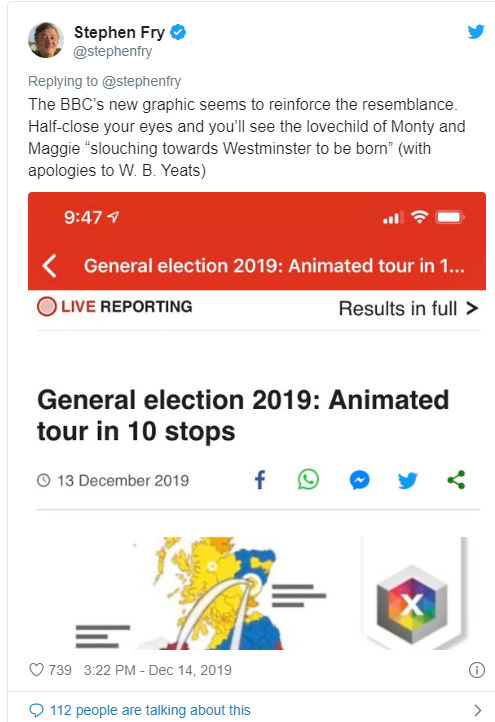 After the hilarious reactions, some people began putting forward their own Simpsons comparisons for the British electoral map. One user likened the map to Maggie from the Simpsons while another user commented with Mr Burn's iconic phrase of 'Smithers, release the hounds'.
Monty Burns also called Mr Burns on the show Simpsons is synonymous with extreme money-grabbing lack of morals and empathy for the workers.

I guess you could say, Brexcellent.

This is so utterly incredible I can’t even fathom. Possibly the most amazing thing I’ve ever seen!

I still see what I've always seen; a Schnauzer in a crumpled top hat with his eyes closed, and now he's sticking his tongue out too.

Read: Stephen Curry Candidly Reveals The Biggest Challenge He Has Faced In The NBA So Far