As India continues to cheer US presidential hopeful and VP nominee for Democrats, Kamala Harris, here are top 5 things to know about her relations with India. 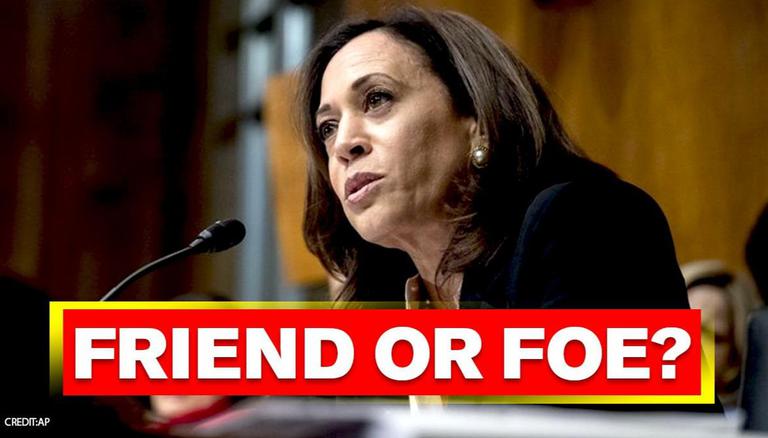 As India and a significant population in the US continues to cheer for Kamala Harris' historic VP nomination, not all Indian policymakers seem to be entirely thrilled with the development. There are several reasons for that but the most obvious ones stem from their open pro-Pakistan backing on the Kashmir issue.

Joe Biden's running mate for the 2020 White Hosue presidential race Kamala Harris has been a vocal and sharp critic of India's Kashmir policy, especially after the revocation of Artice 370 and special status that was granted to the union territory.

Notably, last year, when Senator Harris was running her own campaign for the Democratic nomination, on two occasions she was asked about her stance on the Kashmir issue, and unsurprisingly she backed the demand for international intervention, specifically the US.

In one of her interviews, she stated 'We have to remind Kashmiris that they are not alone in the world. We are keeping track of the situation. There is a need to intervene if the situation demands.'

The Democrats have generally been less inclined towards India than Republican Presidents, for a variety of reasons generally related to America's geostrategic interests and Pakistan's proclivity towards fostering an economic and diplomatic model that is reliant on military and humanitarian aid, investments and hand-outs.

On the eve of  India's Independence Day, when US President Donald Trump in his usual rant, launched an attack on democrats — but this time directed it at Kamala Harris, and was quoted as saying, 'I have more Indians than she has.'

This remark has less racial and ethnic  prejudice than many would think considering the fact that for a significant section of Indian Americans and NRIs working in the US, Trump may be a better option, here's why:

1) Biden-Harris' support of pro-Pakistan lobbies in the US

President of Voice of America and Hindus for America, Ram Sastry, in a townhall organised in the US had unambiguously stated Biden was not a good choice for Indians owing to her 'anti-India' stance. He called her 'Hinduphobic' and 'pro-Pakistan'. The NGO's president minced no words in his interaction with the media when he called the presidential hopeful a 'flip-flop politician.'

The US, in the last few decades, has banked on Pakistan being a key hub for its strategic interests in the region, being given free reign to conduct numerous activities from and on Pak soil that few sovereign nations would allow. However, US has also suffered the consequences of putting its faith in Pakistan's paper civilian governments while its military-deep state has used US aid to proliferate non-state actors across the region - including rampant terrorism across all its borders.

Several smaller groups and Hindu organisations in the US see Harris as a threat to India and America's growth. Another such group, Americans4Hindus, chaired by a senior cardiac surgeon in San Francisco Dr Romesh Jhapra, dismissed the senator's Indian lineage and supported his argument saying 'She (Harris) has moved too far to the left and supports ultra-socialist policies.' He further went on to extend the support of the group for President Trump and incumbent administration.

Kamala Harris has been accused by Republican candidate Nisha Sharma, who she ran against in California as 'playing on people's emotions.'  The Senator has repeatedly taken a strong stance against India's national interest in matters of CAA (Citizenship Amendment Act) and revocation of Article 370 which abolished the temporary special status granted to Jammu & Kashmir and Ladakh. Nisha Sharma also attacked her national policies and said Harris' policies go 'against the fabric of US and against meritocracy'.

Pakistan's complicity with terror led to the neutralisation of Osama Bin Laden within a few thousand feet of a Pak military compound in Abottabad by US forces in 2011(check). US-Pakistan ties have soured greatly over the last few years as various US administrations' schemes have come undone even as a desperate Pak has tilted towards China; whereas India has emerged as the most significant counterbalance to China in the region. During the recent global animosity towards China, it was India that gave the PLA a bloody nose and banned Chinese apps, whereas Donald Trump and Pompeo have largely played to the galleries before the November elections.

When India passed the CAA, five Indian American lawmakers, all of them Democrats, spoke out against the Bill and pushed a resolution in Congress urging that the bill be removed. Later when EAM S Jaishankar was in the US he refused to meet with one of the lawmakers on the reason that their understanding of the Kashmir situation is 'unfair and biased'.

Somanjana Chatterjee, a political strategist in the US made scathing remarks against Harris' relationship with the Indian-American community. She said, 'Living in California for more than 10 years, I have never heard of Kamala mentioning her Indic roots up until her campaign fundraisers for Senate race.' She further alleged that while serving as California's Attorney General, she was 'non-cooperative' when approached for intervention in the State's public schools and revision of depiction of Hinduism in textbooks.

While senator Kamala Harris and the Democratic party leave no stone unturned when it comes to attacking India, they remain mysteriously quiet on the subject of Chinese LAC violations and border incursions. They have maintained a resolute silence on Pakistan-sponsored terrorist attacks in the valley, or pass any resolutions on forced religious conversions in the region. Their apathy towards the mistreatment of minorities and various counts of human rights violations also seem alarming.

Strategic maneuvering in the name of national or personal interest?

The outrage against India or the calculated cosying up to China and Pakistan are strategic and political in nature. A mere ploy to gain favour with the larger Pakistani-origin voter base for democrats. Despite this, Kamala Harris has not shied away from brandishing her Indian heritage as the Indian American community is one of the largest, wealthiest, and most politically driven groups in recent times.

In the larger scheme of things, Kamala Harris is still an American politician trying to woo Indian American voters, of which there are about 10 million people in the country, making that 5% of the overall voting population. Although Kamala Harris has raised no red flags about the Indian government yet, it might still be too early to decisively say whose interest she holds closer to heart.