Recently, multiple reports said that Bill Gates had commissioned hydrogen-powered superyacht, however, the shipbuilder said that the reports were false

Reports of Microsoft co-founder and one of the world's richest man Bill Gates commissioning the world's first hydrogen-powered superyacht for an estimated $644 million has been refuted by Dutch designer Sinot. In a statement the Dutch designer clarified that the reports are 'factually incorrect' and the concept 'Aqua is not sold'. The company further clarified that the hydrogen concept is not linked to Gates in any form or matter.

The statement read, “Aqua is a concept under development and has not been sold to Mr Gates”. The statement further read that the concept was showed in Monaco and Sinot has no business relationship with Gates. Sinot also mentioned that the Aqua is meant to build a better future and inspire clients and the industry. 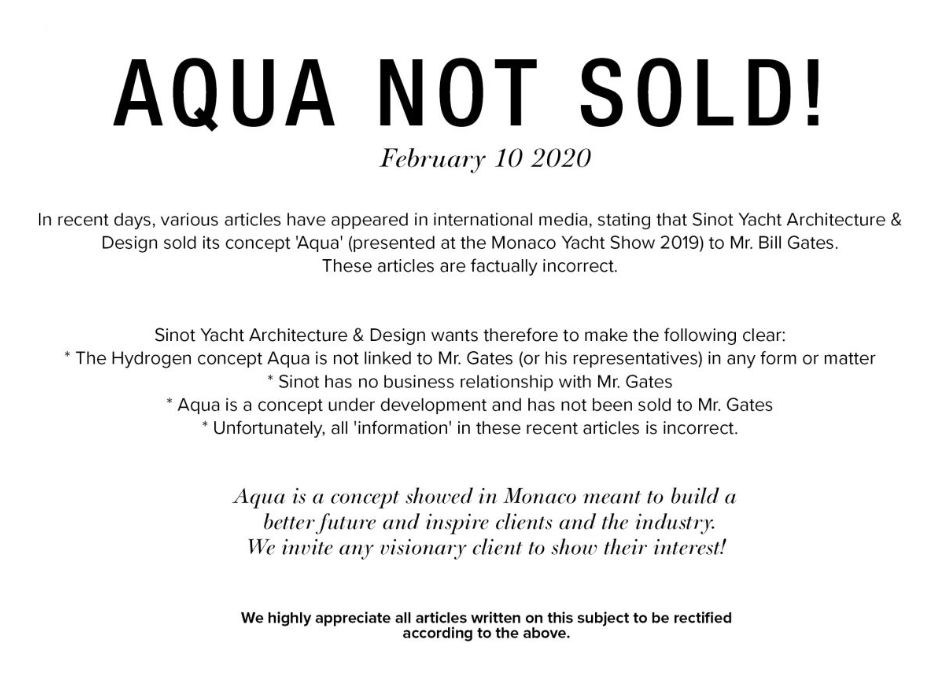 The reports claimed that the Gates bought a futuristic liquid hydrogen-powered yacht. It was believed that the ship will be powered by liquid hydrogen and that the only emission made by the yacht would be in the form of water. According to the reports, the 370ft-long luxury liner was also expected to comprise of five decks, a gym, beauty room, massage parlour, and cascading pool, yoga studio on the rear deck. It was also believed that there would have been room for 14 guests and 31 crew members in total.

The luxury yacht was also expected to have two 28-tonne vacuum-sealed tanks that would have kept cool to a temperature of -253C. The fuel on the yacht would have also helped to create power for the two 1mw motors and propellors from the fuel cells on-board, which would have combined hydrogen with oxygen to generate electricity. The yacht was expected to have the capacity to travel a distance of more than 3,000 miles before having a need to be refuelled.