As early trends begin to favor AAP in Delhi, BJP's Harish Khurana stated that all hope was still not lost and that whatever the mandate, BJP will accept it

As early trends begin to favour the AAP in Delhi, spokesperson for Delhi's BJP, Harish Khurana stated that all hope was still not lost. However, he further went on to say that whatever the mandate would, they would 'humbly' accept it. "The way the trends are coming in, there is still hope." He stated that there was great enthusiasm towards the BJP during campaigning, something that the AAP did not have this time. This makes him believe that the mandate could turn in favour of the BJP.

"I remember the 2015 trends. AAP volunteers had so much enthusiasm, but in this election, whenever I would go to the tables and stalls of the BJP, I could see the enthusiasm there, people would come, they would raise slogans of Jai Shri Ram. There were no volunteers of AAP. That is why I still have a feeling that there is hope."

'We accept everything humbly'

Recently posters popped up around Delhi which had an image of Union Home Minister Amit Shah accompanied with a slogan that read, "With victory, we do not get arrogant. With defeat, we do not get disappointed.' Many people had taken it to be a cryptic message of BJP accepting defeat in Delhi.

In regards to said poster Harish Khurana said, "Even if the Exit Polls go right, we will humbly accept it. That's what the poster means. But I have seen this poster for the past five or six years, it's not new and it stands for exactly what we mean." 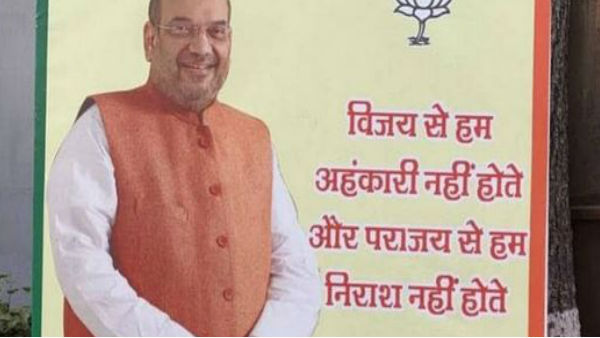 "No matter whatever the verdict is we (BJP) have never shown arrogance, this AAP has already started showing arrogance. The problem of unauthorised colonies, we solved it, we did the work on Jahan Jhuggi Wahaan Makaan scheme, be it Ram Mandir, or 370, we did so much work. We have done the actual work, but AAP has only done false advertising," he said.

Read: Delhi elections: With AAP leading, BJP's Malviya says 'not over till it's done & dusted'