Ajay Devgn and Kunal Khemu to Katrina Kaif wished the Singham director Rohit Shetty on his birthday. Read to know about which celebrities wished the filmmaker.

Filmmaker Rohit Shetty has been giving back-to-back hit films in Bollywood. The Golmaal director is known for the power-packed action sequences in all of his films and has worked with the majority of A-listers in Bollywood. Shetty is celebrating his 47th birthday today, i.e on March 14, 2020. Birthday wishes from his fans, colleagues and friends started popping in from across the country. Several Bollywood celebrities also took to social media to wish the director on his birthday from Ajay Devgn to Katrina Kaif.

Rohit Shetty's friend and lead actor in several of his films, Ajay Devgn was one of the first Bollywood celebrities who wished him on his birthday. Devgn took to Instagram to share a photo with Shetty and captioned the photo writing, "Hi Rohit, here’s wishing you a fabulous birthday and a fantastic year ahead." Ajay Devgn will also be seen in Shetty's upcoming film titled Sooryavanshi, playing the role of Bajirao Singham.

The Malang actor Kunal Kemmu, who has worked with Shetty in all the instalments of the Golmaal franchise also took to Instagram to wish the Singham director. Kemmu shared a candid monochrome photo of Shetty alone on his feed. He captioned the image writing, "May the light always shine on you Brother.. wish you a very Happy Birthday @itsrohitshetty Happiness Health and super-duper Hits always "

Katrina Kaif will also be seen in a Rohit Shetty directorial next alongside Akshay Kumar in Sooryavanshi. The Bharat actor took to Instagram stories to share a photo of Shetty and wished him a happy birthday. Kaif also wished him luck and hopes for him to have a great year ahead. 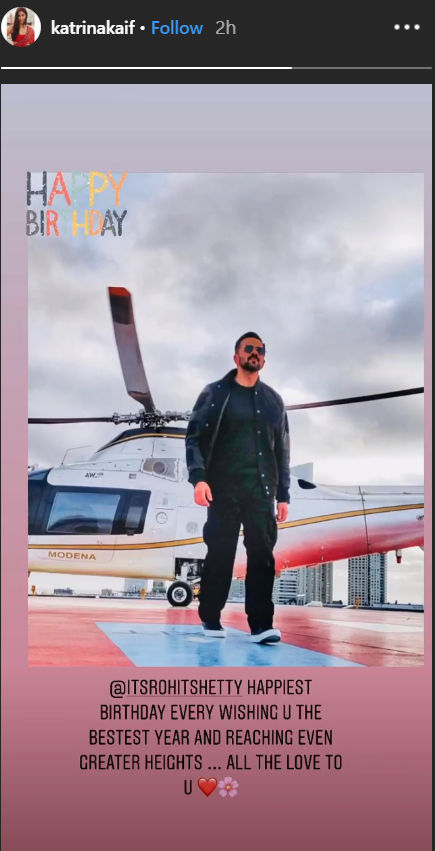 Isha Koppikar also wished Shetty on his birthday on Twitter

Happy birthday to one of the finest directors of the country #RohitShetty! 😊 pic.twitter.com/0ItnSAJCPZ

Rohit Shetty's upcoming film Sooryavanshi starring Akshay Kumar, Ranveer Singh, Ajay Devgn, and Katrina Kaif was slated to release on March 24, 2020. However, due to the outbreak of Coronavirus, the makers decided to push the release date of the film. The new release date is not yet announced by the makers.