Alaya F Went All Out To Show Her Support For LGBTQ Rights, This Throwback Pic Is Proof

A throwback picture of Alaya F has been doing the rounds on the internet where she can be seen supporting LGBTQ rights. Read on for more details.

Alaya F is a newcomer in the Bollywood industry and has garnered appreciation from critics as well as fans for her performance in her debut movie, Jawaani Jaaneman. The actor has gained popularity on social media quickly and is adored by her fans for her fashion sense and creativity. Alaya F has been known for spreading positivity and motivational messages on her social media account. An old picture of Alaya has been doing the rounds on the internet recently where she can be seen promoting queer rights.

Read | Alaya F Gives A Glimpse Of How She Used Her Face When She 'ran Out Of Canvas', Watch Video

In this throwback picture, the actor can be seen raising awareness about the rights of the LGBTQ community and taking a stand in their favour. In the picture, Alaya can be seen wearing a black turtleneck top. Her hair is tied up in a messy hair updo and she has painted her lips in rainbow colours to signify the LGBTQ flag. The picture was posted in the year 2017 and she had captioned her picture saying that love has no gender, compassion has no religion, and character has no race. Check out the picture below.

Read | Alaya F's Photos Of Teaching Children From Rural Areas Are Inspirational; Check Them Out

The picture from 2017 has been going viral on the internet. Check out some recent fan comments on the picture below. A fan commented pointing out to the fact that her lip make up must have taken a lot of time and another fan said that the picture was really cool. 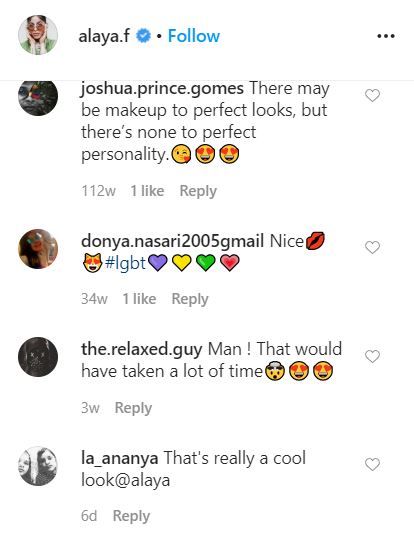