Alia Bhatt and Gulshan Grover's picture together is being highly loved by fans as the two are set to shoot for the movie Sadak 2, directed by Mahesh Bhatt.

Alia and Gulshan in Sadak 2

In the picture, Alia Bhatt can be seen smiling broadly as she stands and poses with the experienced actor. Fans are excited to see the two together in a movie since the time this picture has surfaced. Alia Bhatt can be seen wearing a white t-shirt along with denim jeans and Grover is dressed in a simple chequered shirt. Here are some reactions to the post: 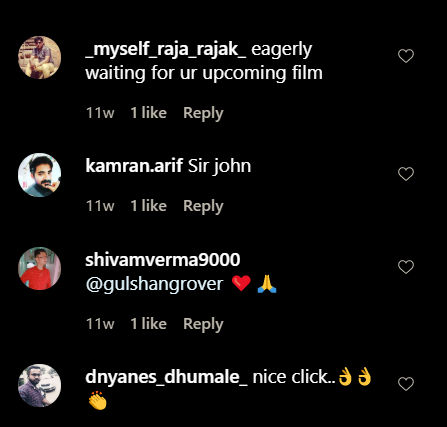 In a recent interview as reported by a leading entertainment website, Gulshan Grover answered questions on his role in Sadak 2. The actor revealed that the character in the movie is interesting, scary and relevant at the same time. The actor is returning to the role of a villain after a long time. He also said that the character is so impactful that it will remain in the minds of the audience for a long time.

The movie Sadak 2 will also star Sanjay Dutt. Gulshan Grover talked about how he has great chemistry with the actor in the past. He claims that this on-screen animosity between the two will only grow after Sadak 2. According to some rumours, Alia Bhatt will be playing the role of someone who is on a mission to expose a fake guru. The report also claims that the shooting of Sadak 2 started in Mumbai. It has its second schedule in Ooty.

The movie Sadak 2 is directed by Alia's father and director Mahesh Bhatt. Alia Bhatt will also be seen in the movie Gangubai Kathiawadi. The movie will release on September 11, 2020. She is also shooting for the movie Brahmastra with Ranbir Kapoor and Amitabh Bachchan.