Amitabh Bachchan in his blog recently hinted about 'the sadness within' as his thoughts were plagued with the recent deaths in his family and illness of others.

Amitabh Bachchan in his blog recently hinted about 'the sadness within' as his thoughts were plagued with the recent deaths in his family and illness of others.

After sharing happy memories on son Abhishek Bachchan’s 44th birthday about how he used to suck his two fingers as a toddler, he opened up about the recent death of his daughter Shweta Bachchan’s mother-in-law Ritu Nanda and illnesses of others. He wrote, “...plagued by recent passings away in the family .. illnesses of others and the uncertainty of it all crawls upon you in the devastation that unearths levels of sadness within and the inability to do any else.”

Big B speaks about the 'sadness within'

He goes on to write how “suddenly the most normal acts seem to be so labored and avoidable” and that “only those that are besieged can understand .. when the mind wishes to break through all of that and run into a canvas protected soft rubbered mattress.” Coming out of his thoughts and how he will overcome all of it, he says, “when the will and the strength of its bearing are depleted .. then shall one rise again in defiance. That then shall be the revelation of the power of one .. the power hitherto understood by none no more .. except by the own .. that is the writing ever written on stone ... in the end, it shall just be me, be I .. and none other ..” 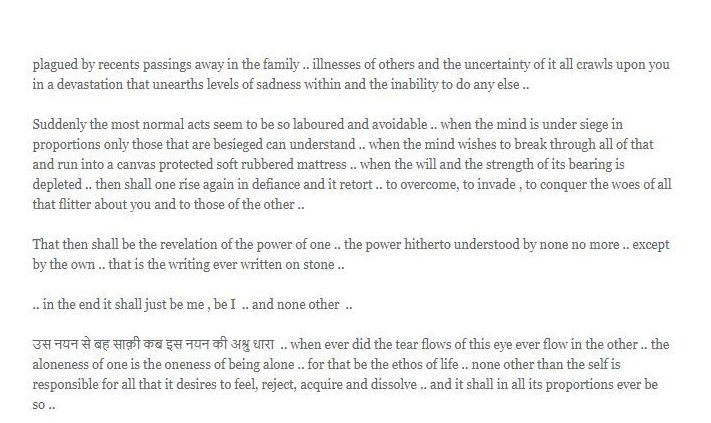 In another blog, he had again talked about his health woes. He wrote about how “the back was bad, and the old injuries do play up .. degeneration of bones occur as age progresses .. happens .. but you repair and move .”

Hours after that, Big B shared the happy memories related to his son Abhishek Bachchan who turned 44 today. He talked about how Junior B used to suck his two fingers as a toddler.

Abhishek rang in his birthday with his family with an intimate celebration. Aishwarya shared photos from the celebrations in which the lovely couple is seen posing with Amitabh and Jaya Bachchan and their daughter Aaradhya.

READ: Amitabh Bachchan Had A Special Appearance In THESE Regional Films