Amitabh Bachchan Posts A Throwback Picture, Captions It As '42 Years Of Don'

Amitabh Bachchan posts a throwback picture of himself winning an award for Don and captions the picture as 42 years of Don. Read further to know more.

Don happens to be one of the most iconic films in Bollywood history. The classic Amitabh Bachchan crime thriller was a delight to watch and was a huge hit. Amitabh Bachchan has now gone on to share an exclusive picture in remembrance of this iconic film celebrating 42 years.

Amitabh Bachchan posts a throwback picture, captions it as '42 Years of Don'

The veteran actor took to Instagram to share his thoughts about the film completing 42 years. In the post shared by Amitabh Bachchan, one can see him standing with a Filmfare trophy with Nutan. The actor at the time had won the trophy in the Best Actress category for her excellent work in the film, Main Tulsi Tere Aangan Ki. Amitabh Bachchan had also won his Filmfare award for his spectacular performance in Don. 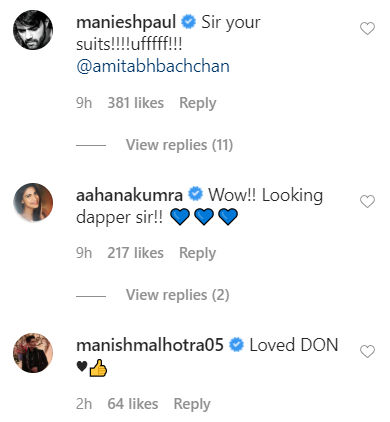 Walking down memory lane, Amitabh Bachchan in his caption mentioned that the film Don was produced by Nariman Irani. The producer passed away in an accident hence Amitabh Bachchan dedicated his Best Actor trophy to his wife. As the caption went on, Amitabh Bachchan revealed that he called her up on stage as well.

Don was one of the cult classic films, which is loved by many fans even today. The film saw Amitabh Bachchan playing a double role, an underworld boss and his polar opposite look alike. The film was directed by Chandra Barot and was a huge hit and received immense love from the masses. Don also starred actors like Zeenat Aman, Pran, Iftekhar, Helen, Om Shivpuri, Satyen Kappu, Mac Mohan, Yusuf Khan and Pinchoo Kapoor. Currently, the Bollywood veteran is spending time with his family in this lockdown. However, the actor keeps posting throwback pictures from his films to keep his fans entertained and to also give a few fans a trip down memory lane.