Ananya Panday is self quarantining and is keeping herself and her fans entertained with different activities. This time Shakun Batra decided to join her

The Coronavirus outbreak has affected millions of people around the world. Prime Minister Narendra Modi has announced a 21-day lockdown across India for the same reason and citizens have been requested to not come out of their houses and maintain social distance. However, in the midst of all this, Bollywood celebrities are utilising this isolation time to catch up with their colleagues and friends. Recently, Ananya Panday shared a video of the director Shakun Batra talking about his upcoming project.

Ananya Panday shared an Instagram story where she recorded the director Shakun Batra talking about his new movie. The actor is seen revealing the plot. However, it turns out he is just trying to mock the present situation as he says that in his movie, the two lovers would be seen going on a sanitser hunt in Mumbai. Ananya Panday went on to share the video by tagging her co-stars Deepika Padukone and Sidhant Chaturvedi. 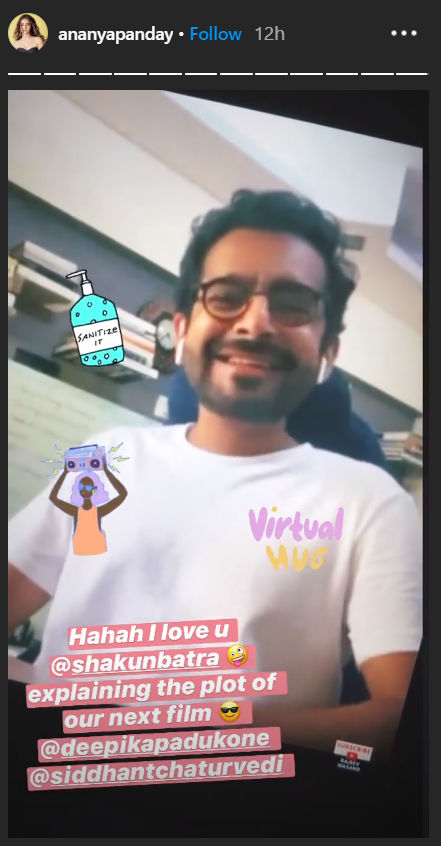 Ananya Panday will be seen next in Shakun Batra's yet-untitled film. Batra had earlier directed Ek Main Hu Aur Ekk Tu and Kapoor & Sons. His upcoming movie also has Siddhant Chaturvedi and Deepika Padukone in the cast. It will be bankrolled by Dharma Productions and is slated to hit the theatres on February 12, 2021, apparently going for Valentine's Day release. According to a media report, their upcoming project is going to be a relationship drama where the characters find themselves stuck in a morally ambiguous zone.

IT'S OFFICIAL... #DeepikaPadukone, #SiddhantChaturvedi and #AnanyaPanday in Shakun Batra’s next film [not titled yet]... Shakun [#EkMainAurEkkTu, #KapoorAndSons] will also produce the film with Karan Johar and Apoorva Mehta... Starts 2020... 12 Feb 2021 release [#ValentinesDay]. pic.twitter.com/VcZWFIRf6S