Anil Kapoor took to his Instagram account and posted a sweet birthday note for his daughter Rhea Kapoor. Read on to know more details about it.

Anil Kapoor took to his Instagram handle and wrote a birthday note for his daughter, Rhea Kapoor. Rhea Kapoor is a producer and stylist and celebrates her 33rd birthday today. Read the post below to know what did he write.

In the post, Anil Kapoor was seen mentioning the sweet memories and the kind of relationship he has with his daughter. He wrote in the Instagram caption that Rhea was his favourite sparring partner and that she always inspires him to follow his instincts. The actor said in the post that he would like to take inspiration from her and trust good intentions as unapologetically as she does. Anil Kapoor praised Rhea Kapoor further by saying that she is the boss of all the bosses. He concluded the note saying that he loves her and would always be her biggest cheerleader.

Other celebrities and fans of the actor could not help but show him positive response for it. As soon as the post went up, it received comments from fans and celebrities alike. Check out the comments below. 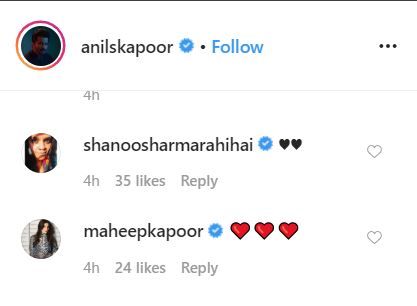 Also Read | Kareena Kapoor Khan Credits Hubby Saif For Her Reinvention; Says It's About The Mind 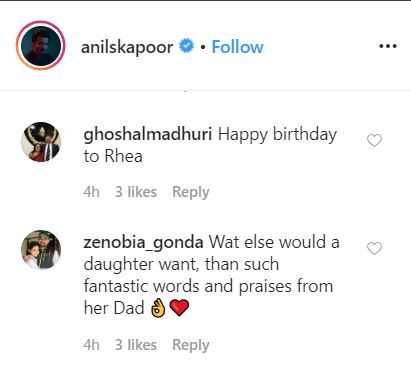 Also Read | Riteish Deshmukh: 'Tiger Does Action Scenes Like It's Poetry In Motion; I Can't Do It'

Check out more pictures of the father-daughter duo below.

Here are a few more pictures of Anil Kapoor and Rhea Kapoor together posted on Instagram. Check them out below.