Singer Ankit Tiwari who sang some of the soulful tracks from the popular film Ek Villain, recently shared information about the sequel.

Singer Ankit Tiwari who sang some of the soulful tracks from the popular film Ek Villain, recently piqued the curiosity of the fans while sharing information about the sequel. The singer took to Instagram and shared a selfie with director Mohit Suri and actress Tara Sutaria while informing about their preparations for Ek Villain 2. The post has been receiving an immense response from the fans who could not control their excitement.

While captioning the post, the Teri Galliyan singer wrote, “Rolling up our sleeves for #ekvillan2... Are you guys excited? The fans were quick enough to comment under the post and explain their level of excitement. One of the users wrote, “Is that a question, sir. Excited". Another user wrote, “I'm really excited". A third user chime din and wrote, “Verrrryyy excited for #EkVillian2 music". Another user echoed similar sentiments and wrote, “Very very excited for the sequel, just can’t wait". 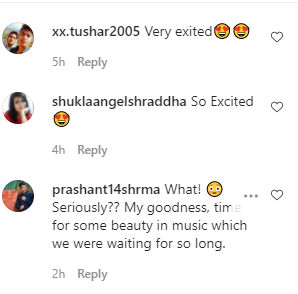 Read: Tara Sutaria Shares Glimpse From Her Maldives Vacay, Fans In Awe Of Her Beach Pic

As per various media reports, Tara will be seen in the film as a singer and while interacting with the press at an event last year, she had revealed that she will be singing her own songs in the film. According to Pinkvilla, the actress had then revealed that she is thinking to sing some of the songs in the film which is something she has been looking forward to for a very long time. And now she is finally getting an opportunity to do so which made her more excited about the film. Celebrity photographer Viral Bhayani shared a video of the trio as they were spotted together at a dubbing studio in Bandra.

The film is a sequel to the 2014 Sidharth Malhotra, Shraddha Kapoor, and Riteish Deshmukh starrer thriller. The first instalment revolves around Guru (Sidharth), a gangster whose life changes after he falls in love with Aisha (Shraddha) and decides to mend his ways. When Aisha gets murdered by a serial killer, Guru begins to search for the culprit. And later while walking on the path of a good man, Guru finds the culprit, seeks his revenge. The sequel will also feature John Abraham, Arjun Kapoor and Disha Patani in the key roles.