Arjun Kapoor was recently seen enjoying a date night with an actor. Here are the details about Arjun Kapoor's date night. Read on to know more about it

Arjun Kapoor is gearing up for his upcoming movie Sandeep Aur Pinky Faraar. But due to the coronavirus outbreak, the makers of the team decided to postpone the release date of the movie. The movie was scheduled to release on March 20, 2020.

Given the coronavirus (COVID-19) outbreak in the country, we have decided to postpone the release of Dibakar Banerjee’s Sandeep Aur Pinky Faraar. The health and safety of everyone is of utmost importance at this time.

The team of Sandeep Aur Pinky Faraar have not announced the upcoming date. Arjun Kapoor was asked in an interview about the date getting postponed and the actor said that the safety of people is important. He added that he will spend his time doing something productive. Arjun Kapoor was recently seen enjoying a  'date'.

ALSO READ | Anil Kapoor Cracks Up At Nephew Arjun Kapoor’s Impression Of Him: "We'll Talk About This"

Arjun Kapoor is quite active on social media. The actor recently posted a story on his Instagram account where he was seen binge-watching the 2015 movie The Revenant. Arjun Kapoor mentioned in the story that he is on a date night with Leonardo DiCaprio. 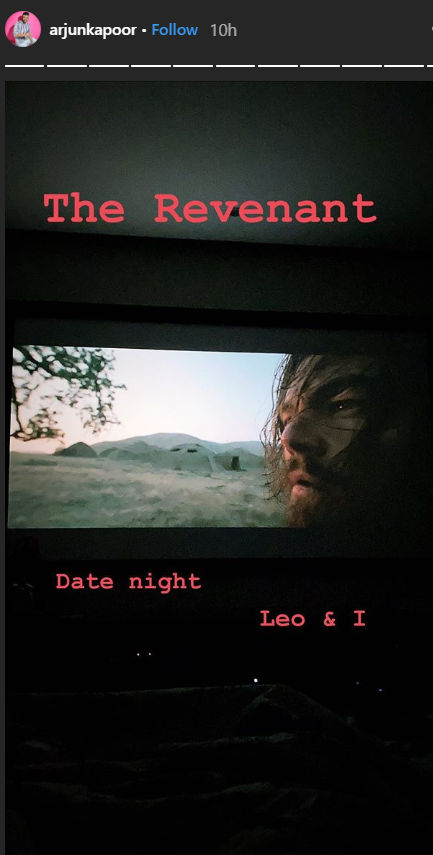 The plot of the movie is about Hugh Glass (Leonardo DiCaprio), a legendary frontiersman who gets injured in a bear attack. He uses his skills to survive and take revenge on the people who betrayed him. Leo's movie The Revenant was a blockbuster hit and he also won the award for Best Actor at the Oscars for it. The cast of the movie also include Tom Hardy, Domhnall Gleeson, Will Poulter, Forrest Goodluck, Paul Anderson, Kristoffer Joner, Duane Howard, Grace Dove, Melaw Nakehk'o, Arthur Redcloud, Lukas Haas and Brendan Fletcher. The movie was directed by Alejandro.

Check out the trailer of the movie

ALSO READ | Arjun Kapoor Puts Up A Note In Support Of Neha Dhupia, Says She Deserves Benefit Of Doubt