Arjun Kapoor recently shared a collage of two pictures on his social media. The actor flaunted his 'same-same' smile but his drastically transformed appearance.

Arjun Kapoor's is one of the sought-after actors of Bollywood who is highly admired by his fans for his drastic physical transformation. The Panipat actor gives major fitness goals to millions across the country with his fitness. From weighing 140 kilos to flaunting 6-pack-abs, Arjun' Kapoor's weight-loss journey is quite commendable. Recently, he reposted a photo on his Instagram stories flaunting his 'same-same' smile.

The Ishaqzaade actor recently took to his Instagram handle to share a collage of two pictures. With one being his childhood picture and the other his recent one, Arjun flaunted his charming smile that has remained constant throughout the years irrespective of the major weight loss. The image was captioned, "same-same, but different," which suggests that his smile is the same in both the images, but his physical appearance has drastically changed. 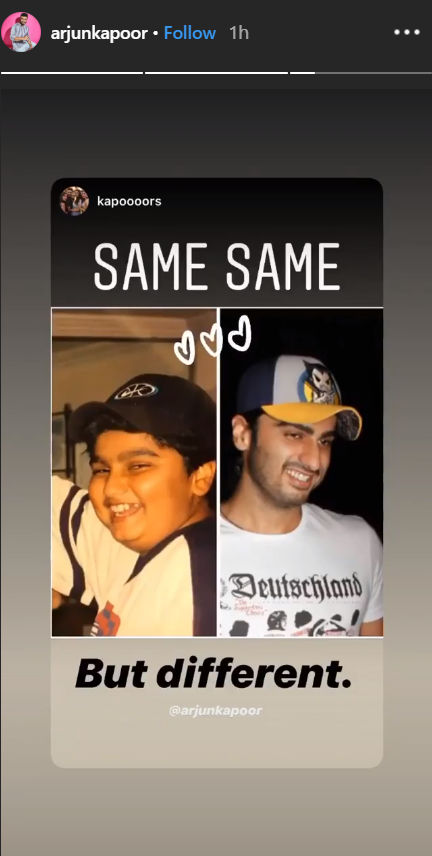 Arjun was recently making it to the headlines after the trailer of his upcoming film titled Sandeep Aur Pinky Faraar was released by the makers on social media. Arjun will be seen sharing the screen space with Parineeti Chopra yet again after two years. The film was slated to hit the silver screens on March 20, 2020, but its release date has been postponed by the makers of the film. Due to the coronavirus outbreak, the makers of Sandeep Aur Pinky Faraar, Yash Raj Films have decided to postpone its release without announcing a new release date.

Given the coronavirus (COVID-19) outbreak in the country, we have decided to postpone the release of Dibakar Banerjee’s Sandeep Aur Pinky Faraar. The health and safety of everyone is of utmost importance at this time.

Also Read | Arjun Kapoor’s Net Worth Is This Much After His Recent Films; Details