Arjun Kapoor Shares A Relatable 'legendary' Post Amid COVID-19 Lockdown; Check It Out

Arjun Kapoor recently shared a joke online that his fans truly found relatable. The joke was about the COVID-19 lockdown and how people we dealing with it.

Several Bollywood stars are in self-quarantine due to the COVID-19 lockdown and sharing their updates on social media. Celebs like Arjun Kapoor, are still keeping in touch with the fans through social media. Many stars are still trying to keep their fans entertained during these difficult times. Recently, Arjun Kapoor shared a relatable joke on his Instagram page that truly resonated with his fans.

Also Read | Malaika Arora spends time with her 'Quarantine love' and no, it is not Arjun kapoor! 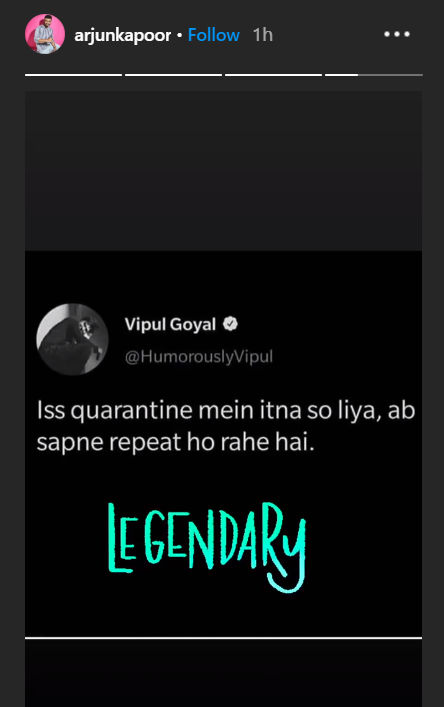 Above is the joke that Arjun Kapoor recently shared on his social media story. The joke was initially shared online by comedian Vipul Goyal. In the joke, Vipul Goyal states that he has slept so much during the COVID-19 lockdown, that now even his dreams are repeating themselves. This 'legendary' joke was then reshared by Arjun Kapoor, who must have found it relatable.

The 2 States actor also shared several other posts on his story that dealt with the ongoing COVID-19 lockdown. In one post, the actor asked his fans to stay indoors to help prevent the spread of the virus. In an older story post, the actor called healthcare professionals heroes, as they were the one protecting others from the Coronavirus pandemic. 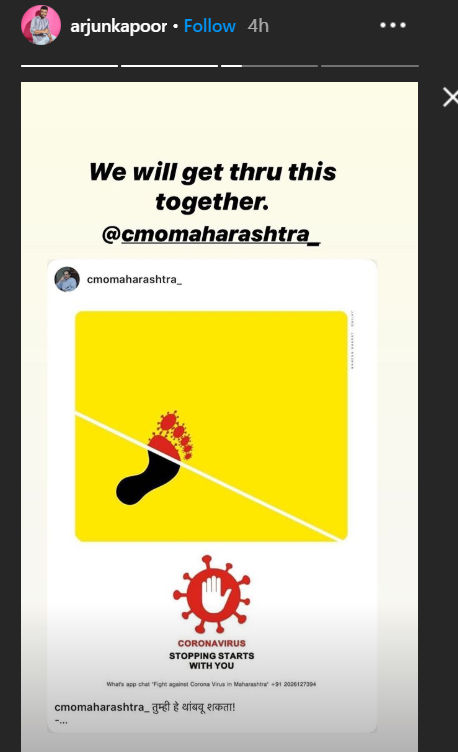 On the work front, Arjun Kapoor was all set to feature on the big screen in the black comedy film, Sandeep Aur Pinky Faraar. The film was initially set to release on March 20, 2020. However, the movie never premiered in theatres and was indefinitely pushed back due to the Coronavirus pandemic. No new release date for the film has been announced.

PEOPLE HAVE PLEDGED SO FAR
LATEST NEWS
View all
2 hours ago
Farhan akhtar's songs that crossed over 30 million views on youtube
55 mins ago
Amitabh bachchan played the role of a cop in these films; see list
2 hours ago
'our moga boy': punjab cm captain amarinder singh expresses his pride at sonu sood's feat
27 mins ago
'ghar ki murgi...': twinkle khanna on akshay kumar forgetting to tag her in 'padman' post
2 hours ago
Katrina kaif lights up the internet with a beautiful breezy picture