Taking to Instagram, Arjun Kapoor posted a video on his story which says ‘Need to resume shooting ASAP’. In the video, Arjun used an Instagram filter. Read more

After beginning 2020 with his rumoured girlfriend, Malaika Arora in Goa, Bollywood actor Arjun Kapoor wants to resume shooting for his upcoming untitled movie. The movie will also feature Rakul Preet Singh in a prominent role. Taking to Instagram, Arjun Kapoor posted a video on his story which says ‘Need to resume shooting ASAP’.

In the video, Arjun used an Instagram filter which features a cool spectacle saying 2020. He is seen making a sad face. Arjun’s facial expression indicates how badly he misses shooting for his next comedy-drama. 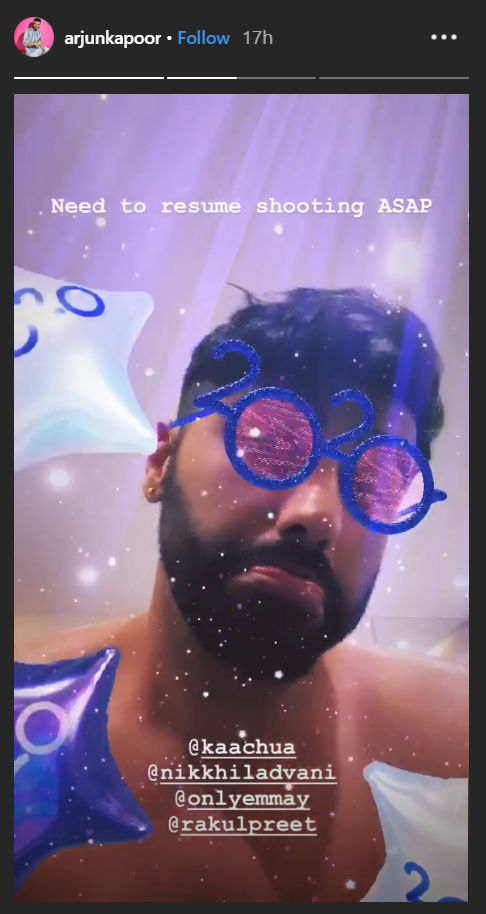 ALSO READ| Rakul Preet Singh Is Set To Own 2020 With Her Roles, Check Out Her Upcoming Movies Here

Arjun also tagged the film’s director Kaashvie Nair and the producers Nikkhil Advani and Monisha Advani. The shooting of the film began on November 6, last year. Fans are desperately waiting for the movie to release and watch Arjun’s comic avatar.

In an interview with a reputed daily, Arjun Kapoor spoke about the film saying that it is a comedy-of-age story and a family comedy-drama. Arjun Kapoor further added that the film is a new experience for him. It is something that he hasn’t done before.

Arjun Kapoor recently made headlines for spending a romantic vacation with Malaika Arora in Goa. The duo looked extremely happy while celebrating the new year together. Have a look at their picture here.

ALSO READ| Marriage Not On The Cards Yet, Malaika Arora And Arjun Kapoor To Take 'one Step At A Time'

PEOPLE HAVE PLEDGED SO FAR
LATEST NEWS
View all
1 hour ago
Bhumi pednekar and shanoo sharma's pictures that showcase their camaraderie
1 min ago
Pooja hegde fumes at instagram hackers: 'hope you haven't given out personal information'
1 hour ago
When deepika padukone shared common connect with nithya menen during 'chhapaak' promotions
22 mins ago
Deepika padukone's adorable photos with her family are unmissable; check out
48 mins ago
Check out deepika padukone's picture with her friends from the industry