Arjun Kapoor took to social media to post a moon-lit dreamy picture in which he credited the picture to be clicked by a mysterious "Her". Read to know more.

Arjun Kapoor surprised his fans on Instagram with an amazing moonlit picture of himself. The actor looked dapper in the subtle yellow tones which matched the shorts he was wearing. The fairy lights too complimented this picture giving it an extra shine. However, it was the caption of the image that intrigued fans as the actor credited the photographer with a mysterious person, writing it off as “her”.

Upon posting the image on Instagram, fans of the actor were quick to comment and react to the image. Fans flocked in the comments section writing a number of positive and sweet comments for Arjun Kapoor. Fans called him handsome and thus praised him throughout the comments section. Sharing the image on Instagram, Arjun Kapoor wrote that a dreamer is one who can find way only by moonlight. Thus the profound quote too received immense love from fans who were outpouring their love in the comments section of the post. Eventually in the caption, the actor tagged the picture credits to a mysterious “Her”. Upon closer inspection, one can notice the tag on the picture was made to Malaika Arora. Thus solving the mystery of “Her” by assuming that Malaika was the one who clicked the image for Arjun which he uploaded. 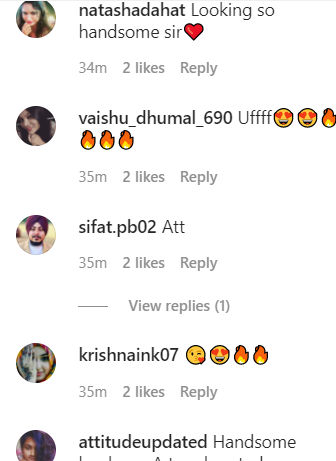 If one were to take a closer look at the image, the actor is wearing the same shirt as he wore in one of the pictures uploaded by Malaika. The actor and Malaika were seen in each other’s arms in one of the posts made by Malaika on her Instagram account. In that image, Arjun Kapoor can be seen wearing the same yellow shirt with similar designs all over it. Malaika on the other hand donned a shimmery silver outfit. Thus one can assume that the image was taken from the same event or party the two were attending at the time. Fans, however, loved both the images and showered their love on both the posts. Malaika Arora posted her image on Instagram on New Year’s day as she welcomed 2021 with Arjun Kapoor.