Tiger Shroff’s mother Ayesha Shroff who is quite active on social media, recently shared a heart-warming picture with her son on Instagram while expressing love

Tiger Shroff’s mother Ayesha Shroff who is quite active on social media recently shared a beautiful picture with her son and penned a sweet note for her ‘love.' In the heart-warming picture on Instagram, Tiger can be seen striking a cute pose while hugging his mother. While captioning the adorable snap, Ayesha Shroff mentioned that it was clicked by her daughter Krishna.

Ayesha further wrote, “In the arms of one love and shot by my other love.” Tiger’s rumoured ladylove Disha Patani who is often seen dropping sweet comments on his mother’s post was quick to comment on her latest post too. Disha was all hearts for their picture as she commented, “So cute” along with many heart-shaped emoticons. Apart from Disha, Krishna was also among the ones to pour in her love for the picture in the comment section.

Read: Disha Patani, Tiger Shroff & Other Celebrities Who Are A Part Of BTS Fandom In India

Read: Tiger Shroff Reveals Who 'showed Up To Train Before Him'; Watch Video 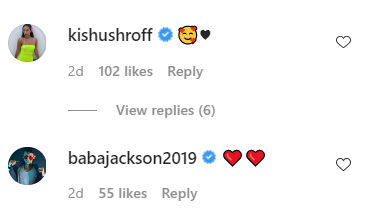 Meanwhile, the actor is currently basking in the success of his debut song Unbelievable. Earlier, he shared a video of himself jamming to the beats of Unbelievable. The ace actor was seen flaunting his groovy moves along with two other dancers. The song is Tiger’s first solo and has been trending ever since it was released. Tiger Shroff was seen sporting a simple white shirt paired with black pants. However, the actor looked stunning in the attire. The video began with Tiger who was set to groove on the dance floor as he buttoned his shirt. He was accompanied by two other dancers who were seen grooving with the actor.

What's next for Tiger Shroff?

On the professional front, Tiger was last seen alongside Shraddha Kapoor in the action-drama film Baaghi 3. Baaghi 3 was helmed by Ahmed Khan and produced under the Fox Star Studios and Nadiadwala Grandson Entertainment banners. The actor is prepping up for the sequel of Heropanti.

Read: Tiger Shroff Reveals Who His Biggest Competitor Is And This Is How Netizens Have Reacted