Environmentalist, actress Bhumi Pednekar who is working rigorously as a climate warrior, shared a post while informing about giving up non-vegetarian food.

Bhumi Pednekar recently shared a post while informing fans about giving up non-vegetarian and food and going fully vegetarian. Bhumi penned her “food for thought” on Instagram where she shared more details about her step of opting to go vegetarian amid the lockdown and she has been able to carry forward her decision successfully.

In the post, the Bala actress wrote that for many years she was working hard on her diet to become a vegetarian but breaking habits was not an easy task for her. Further, she wrote that with her journey with climate warrior, it has made her more compassionate towards the species and has made her even more humble. Bhumi wrote that consuming meat made her a little uncomfortable and so this made her decide upon going vegetarian during the lockdown. Now since it has been months that the actress has given up on consuming non-vegetarian food, she described her condition and wrote that she is feeling “good, guilt-free and physically strong.”

The post of the actress received immense appreciation and love from her friends from the industry. Mom-to-be Anushka Sharma was the first one to comment under the post and wrote, “Yass girl.” Followed by Anushka Sharma was Kunbbra Sait also celebrated Bhumi’s decision in the comment section with folded hands emoticon. Akansha Ranjan Kapoor also expressed her happiness and wrote, “It's gonna be the best decision of your life!!!! Trust me!!! You’re gonna feel great and vegetarian food is just so much better anyway.” Director Mukesh Chhabra poured in his hearts for the post with many heart-shaped emoticons. 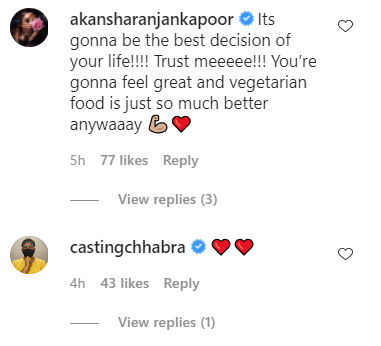 The Sonchiriya actress is among the many celebs who have voiced her concern about the current climate change and water crisis. Earlier, Bhumi, who is rooting for the sustainability of climate conservation, revealed that she believes in repeating clothes. According to a press release, the actress revealed, "I believe in repeating clothes. I repeat clothes all the time. I don’t think that people might see me wearing the same clothes because as an actress you are told to always wear different and new outfits but, honestly, I don't care. There are so many businesses that I have come across where people are renting clothes! I love the idea! It’s genius!"

Meanwhile, on the work front, Bhumi recently completed the upcoming film  Durgavati's dubbing. Interestingly, before the nationwide lockdown was announced in March, the actress had almost completed the film. The film is said to be the remake of the South movie Bhagamathie, in which Anushka Shetty essayed the lead character. Known for its horror-comedy genre the film was a commercial hit in the South. Apart from Bhumi, the ensemble star cast of the upcoming will also include Arshad Warsi, Mahie Gill, and Karan Kapadia in pivotal characters.

Read: Bhumi Pednekar Completes Dubbing Of 'Durgavati'; Says 'see You The Other Side'