Bhumi Pednekar shared an Instagram story where the trio from Pati Patni Aur Woh is seen chilling during the promotions of the movie. Read on.

Kartik Aaryan along with Bhumi Pednekar and Ananya Pandey are on a promotional spree for their upcoming movie Pati Patni Aur Woh in full-swing. The movie is the remake of the 1978 comedy film with the same title. Recently, Bhumi Pednekar posted Instagram stories where the trio was seen on the sets of a show promoting their movie. Bhumi Pednekar, Ananya Panday and Kartik Aaryan are seen having a conversation on the couch and also playing games. The pictures see the trio having fun moments where they troll each other and mock with the team in the middle of the shoot.

Bhumi Pednekar posted stories on her Instagram stories in which she along with Kartik and Ananya are seen cheering with the team. Bhumi Pednekar, in another Instagram story, is seen playing a game where she is making funny faces and blowing a trumpet. The actor also shared boomerang videos while the trio was sitting on the couch. In her last picture, she is seen getting into an argument with Kartik. There are three pictures in the collage. One of those pictures has Bhumi pointing a finger at him and stopping him from saying something. Bhumi Pednekar captioned the picture as ‘Chintu ji! Don’t uchlo too much.’ 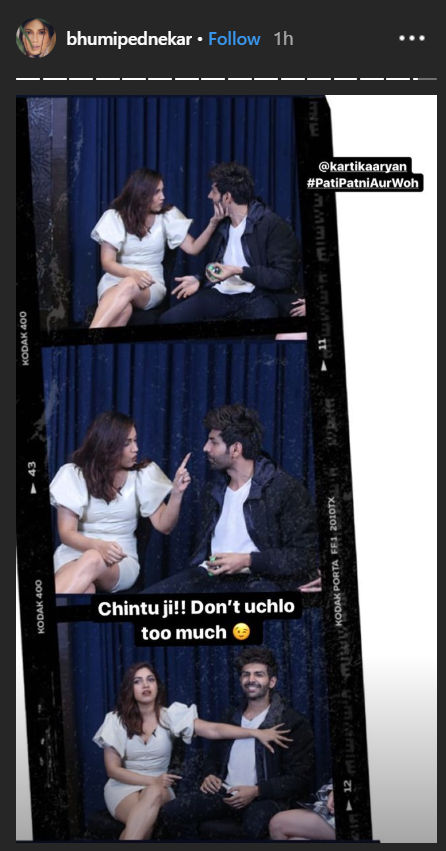 After the massive response that the trailer and the songs from Pati Patni Aur Woh received, the makers of the movie decided to share a total of five dialogue promos from the movie. The visuals once again garnered equal attention from fans. Pati Patni Aur Woh is directed by Mudassar Aziz and produced by Bhushan Kumar, Kumar, Renu Ravi Chopra, Krishan Kumar. The movie is all set to hit the screens on December 6 this year. The first song of the movie recently hit the internet. It is titled Dilbara.

PEOPLE HAVE PLEDGED SO FAR
Kartik Aaryan papped riding without a helmet, netizens school him
From Kartik Aaryan to Sidharth Malhotra, actors reveal their celebrity crushes
Kartik Aaryan: The best quirky looks of the actor you must check out
Bhumi Pednekar and Samiksha Pednekar look like twins in these pictures
Kartik Aaryan plays a guessing game, fans wonder if he would call 'Patni or Woh'
'Tanhaji' continues to stand tall in the face of other star-studded releases in 2020
Net worth of 'Thappad' director Anubhav Sinha on eve of the film's release
Katrina Kaif's trivia from her record-breaking film 'Dhoom 3'; read
DO NOT MISS
AKHILESH VISITS AZAM KHAN IN JAIL
JUSTICE S. MURALIDHAR ON TRANSFER
MAHA GOVT WITHDRAWS BHIMA-KOREGAON
DELHI VIOLENCE: CRIME BRANCH FORMED
MALLIKARJUN KHARGE ATTACKS CENTRE
SONIA GANDHI MEETS PRESIDENT