Ranveer Singh, Abhishek Bachchan, Amitabh Bachchan, and Sonu Sood were in the spotlight today. Here are some of today's top entertainment/celebrity stories.

Today, on May 23, 2020, actor Mohit Baghel passed away at the age of 27 due to cancer. Meanwhile, Sonu Sood was praised by fans and ministers for arranging buses for migrant workers. Here are just some of today's top entertainment and celebrity stories.

Mohit Baghel Passes Away Due To Cancer; Sidharth & Parineeti Mourn The Loss

Actor Mohit Baghel, who starred in films like Ready and Jabariya Jodi, passed away today at the age of 27 after he succumbed to cancer. Director and writer Raaj Shaandilyaa revealed this tragic news on his social media page. After his passing, several big-name celebs took to social media to mourn his loss.

Really shocked to hear this news.. Mohit was such a young, happy, funny & talented guy.. we just shot a whole film together! Upsetting news, my prayers with his family ðŸ™ https://t.co/oGBYivByYO

The Cyclone Amphan has affected a large portion of West Bengal and Odisha. Cyclone Amphan has already caused major loss of property in the states and the Prime Minister has even provided a relief package of â‚¹ 1,500 Crore for the two states. After learning of this tragic news, Abhishek Bachchan took to social media to reveal that he was heartbroken over Cyclone Amphan's wake of destruction.

Sonu Sood has been working hard to help migrants leave the state of Maharashtra amid quarantine. Recently, Maharashtra's Water Resources Minister and NCP leader, Jayant Patil, officially hailed Sonu Sood for his dedication and good work. The minister stated that while Sonu Sood played the role of villains in his movies, he was a "hero" in real life. Even actor Rajkummar Rao took to social media to praise Sonu Sood for his contributions to migrants leaving the state. 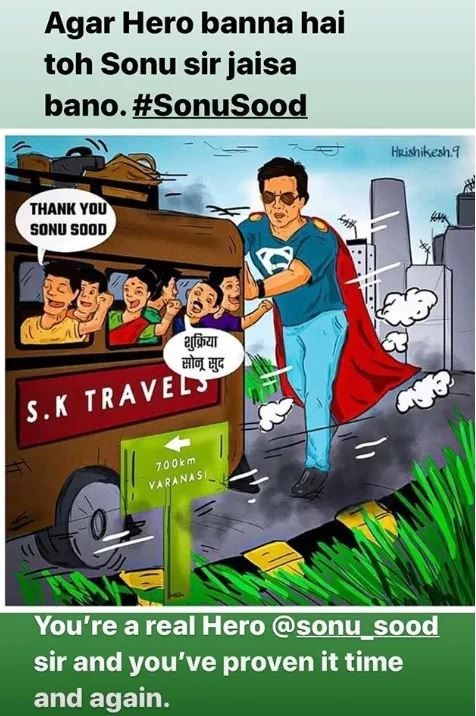 'Yes, The Nose Is Fake,' Says Amitabh Bachchan On His 'Gulabo Sitabo' Look

After the trailer for Gulabo Sitabo was shared online, many fans jokingly asked Amitabh Bachchan if his character's overexaggerated nose was fake. Amitabh Bachchan responded to these fan comments by talking about his 'nose' in his blog. The actor reassured fans that the nose was indeed fake. Moreover, he also talked about how the shape of the nose was integral to his character. He also revealed that his entire character design was based on the nose.