Deepika Padukone took to Instagram to share her quarantine movie watch list suggestion with her fans. Read further ahead to know which film was suggested by her

Deepika Padukone is utilizing her time in lockdown well by indulging in several chores and also keeping herself fit, as seen on her social media handles. The actor also often takes to social media to post photographs and thus showcasing her photography skills. She has also been sharing a bunch of throwback pictures which have given her fans a trip down memory lane. However, one of the most loved things Deepika Padukone has been doing is interacting with her fans by suggesting movies to watch.

Also Read | Deepika Padukone, Aamir Khan & Other Actors Who Would Star In Remake Of Hollywood Films

The actor is back once again with her movie suggestions and this time the actor has recommended an absolute classic film. Taking to Instagram stories, Deepika Padukone wrote “Watch it now” for the movie she suggested. Sharing the poster of The Godfather, Deepika Padukone urged her fans to watch the film.

The poster featured the legendary Marlon Brando in his Don Corleone character from The Godfather movie. The Godfather movie is regarded as one of the most loved films and a cult classic as well by many. The movie has been among the top-rated films on IMDB as well. Hence this movie suggestion from Deepika Padukone is likely to impress avid movie lovers. 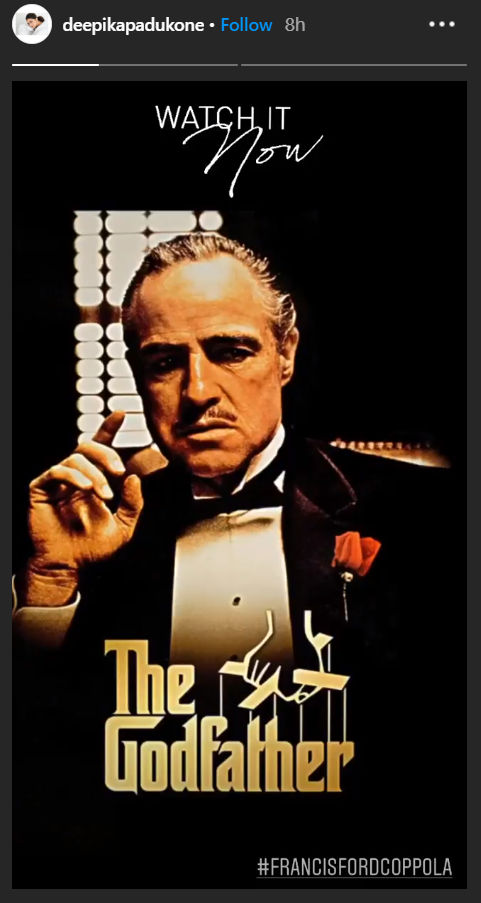 According to a news portal, prior to going into lockdown, Deepika Padukone was working on Shakun Batra’s untitled film. The shots were being scheduled in Sri Lanka at the time, however, as the nation went into lockdown, the shootings of several films got stalled. However, Deepika has reportedly been reading the script of the film and getting herself familiarised with the character she will be playing. According to a news portal, Deepika Padukone has been dedicating a few hours every day to read at least a few pages from the script.