After two hit films, the makers are now gearing up for the third film of the Baaghi franchise. The team recently wrapped up the shooting of the film Baaghi 3. The latest development of the movie is pumping up the crowd.

Baaghi 3 first poster out and here are the celebrities reactions to it:

Tiger Shroff recently took to social media to share the first poster of his upcoming film, Baaghi 3. In the poster, we can see the actor standing in front of an army tank and two helicopters. In the poster, we can see Tiger Shroff holding a gun and fully armed as he is set to face his “strongest enemy”. The background looks like that of a battleground. The poster also indicates that this time, he will be fighting against a nation.

Just after Tiger Shroff shared his first look from the movie fans and Bollywood celebrities started pouring their love for Tiger in the comment section. Disha Patani commented on her rumoured beau's post by sharing fire signs. Hrithik Roshan who shared the screen space with Tiger Shroff in the movie War also commented on his first look. He wrote 'Boom' in the comment while other celebrities like Punit Malhotra wrote that 'Full Power' and Ayesha Shroff showered the post with a variety of emojis. Ahan Shetty wrote 'Taken it to the next level'. Fans also showered their love on Tiger in the comment by sharing lots of heart and love emojis. 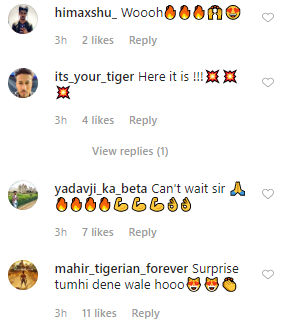 Tiger Shroff also revealed in the caption that the trailer of the Baaghi 3 will be released on February 6, 2020. The latest instalment, Baaghi 3 will also have Tiger Shroff’s real-life father Jackie Shroff play his reel life father. The film also stars Shraddha Kapoor who will reportedly play the role of an air hostess. Directed by Ahmed Khan, Baaghi 3 is scheduled to release on March 6, 2020.