Disha Patani is currently basking in the success of Malang. She recently posted a video on Instagram and Tiger Shroff's family was impressed. Read on to know.

Disha Patani is currently basking in the glory of her film Malang, which is in theatres right now and is garnering praise from the fans and critics. But the actor does not stop with the hard work as she was recently seen lifting heavy weights, and Tiger's family is impressed. Read on to know more about the whole story here.

On February 11, 2020, Disha Patani took to her official Instagram handle to post a video of her workout. In the video, fans can see Patani flaunting her strength as she lifts heavyweights. The caption on the photo that Patani added, reveals that she is lifting over 60 kgs and doing squats. 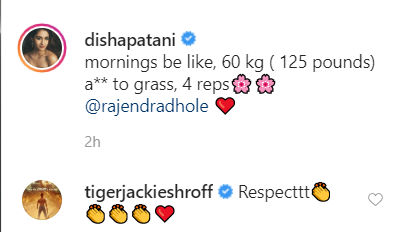 For the unversed, Malang is a 2020 romantic action thriller flick. It is directed by Mohit Suri and is produced by Luv Ranjan, Ankur Garg, Bhushan Kumar, Krishan Kumar and Jay Shewakramani. It features Aditya Roy Kapur, Disha Patani, Anil Kapoor, and Kunal Khemu in the lead roles. The film was released on February 7, 2020. According to the reports, the film went on to collect a total of ₹6.71 crores on its opening day.