Director Nishikant Kamat, who is best known for 'Drishyam' and 'Madaari', passed away on August 17 at the age of 50 due to a relapse in cirrhosis of the liver.

Director Nishikant Kamat, who is best known for his films like Drishyam and Madaari, passed away on August 17. He was 50. The director was earlier admitted to a private hospital in Hyderabad on July 31 due to chronic liver disease and secondary infections. He was undergoing treatment for cirrhosis of the liver after he suffered a relapse and was in critical condition. 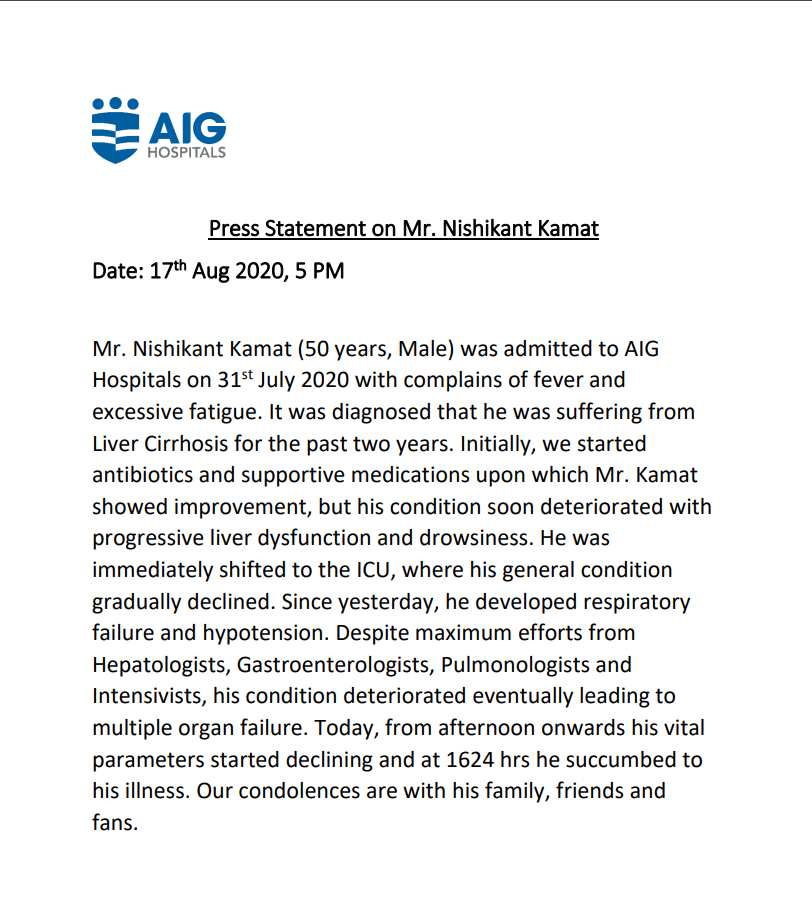 Nishikant Kamat passes away at 50

Bollywood actor Riteish Deshmukh broke the news on Twitter. He posted a photo of him with Kamat. Many Bollywood celebs took to social media to condole the demise of the director.

The director was reported to be in a critical condition earlier last week and was admitted to AIG hospital in Gachibowli in Hyderabad. According to PTI, the medical facility revealed in a statement on August 12 that Kamat was hospitalised for abdominal distention and jaundice. He was later diagnosed with chronic liver disease and his condition was described to be ‘critical but stable’. He had suffered from liver cirrhosis in the past, which had relapsed and Kamat was undergoing treatment for the same.

Nishikant Kamat made his directorial debut with the Marathi film titled Dombivali Fast in the year 2005. The film went on to become one of the biggest hits in the Marathi film industry. The movie received critical acclamation and went on to win the National Award for Best Feature Film in Marathi in 2006.

Kamat shot to fame when he directed the Ajay Devgn film Drishyam. The film was the official Hindi remake of the popular Malayam film of the same name. The movie also starred Tabu, Shriya Saran, and Rajat Kapoor. The director also tried his hand at acting with films like Fugay, Saatchya Aat Gharat, Julie 2, Bhavesh Joshi Superhero, and more. Kamat also played the role of an antagonist in his directorial venture Rocky Handsome starring John Abraham in 2016.