Sushant Singh Rajput’s sister Shweta Singh Kirti recently took to social media to share a post and fans have been demanding justice for him on the post.

Amid Sushant Singh Rajput’s death case, his sister Shweta Singh Kirti has been a pillar of support. Recently, she shared a picture of the State Emblem of India on social media. She also tagged Sushant Singh Rajput’s ex-girlfriend Ankita Lokhande in the same post and wrote in the caption, “#satyemevjayate #indiaforsushant”. Fans of Sushant Singh Rajput have now come out in support of her and are demanding justice to be delivered for Sushant at the earliest.

Since Shweta Singh Kirti shared the post, several fans of Sushant Singh Rajput have come out in support of her. One fan also assured that they will be with her till the end and ensure that the late actor receives justice. Another fan also wrote, “We are with you, mam. we will definitely get justice."

Fans also took to the comment section to talk about how they miss Sushant Singh Rajput. One such fan wrote, “The whole world is with our star we miss him a lot”. Another fan wrote, “I hope truth wins #indiaforsushant”. One fan also spoke about how the interview with Ankita Lokhande on Republic TV is an 'eye-opener' and wrote, “t's interview of Ankita Lokhande on republic tv...must watch it once”. 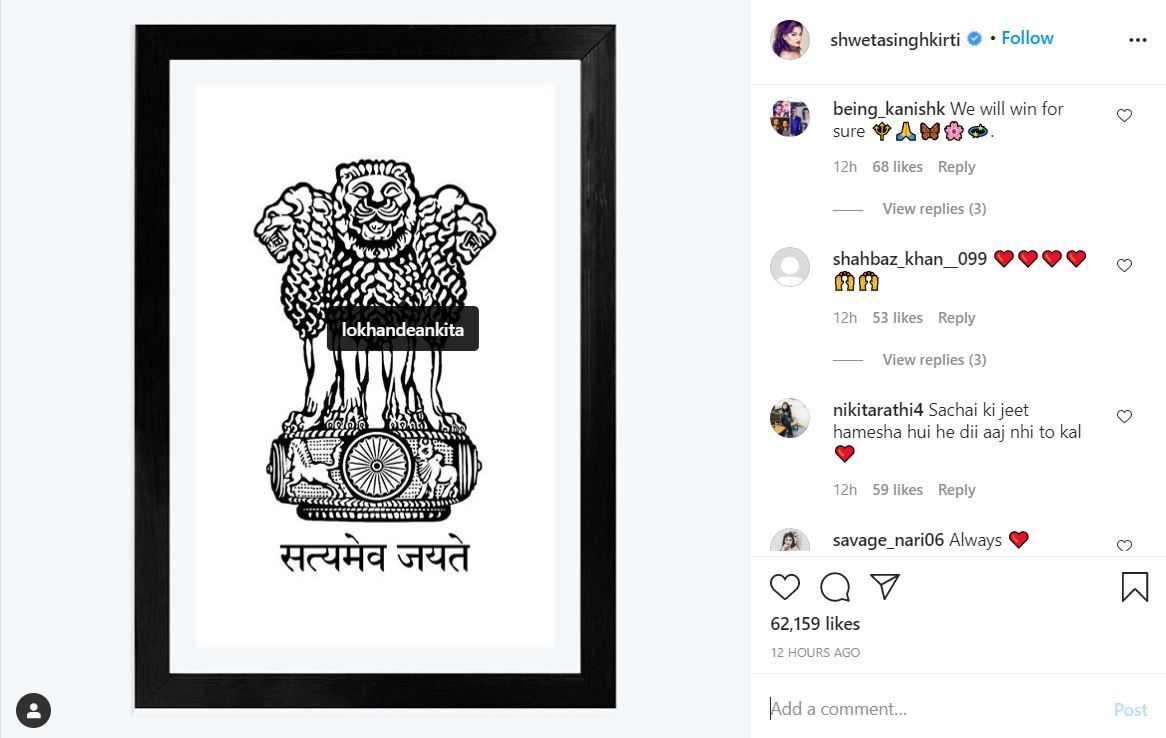 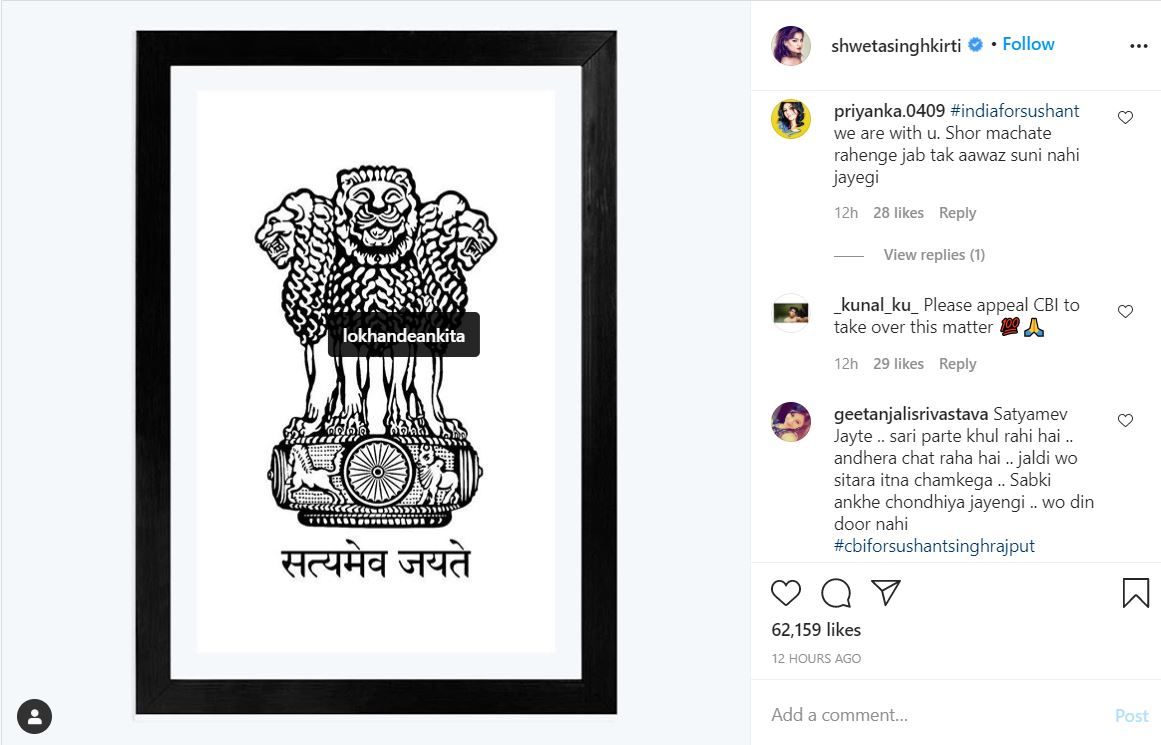 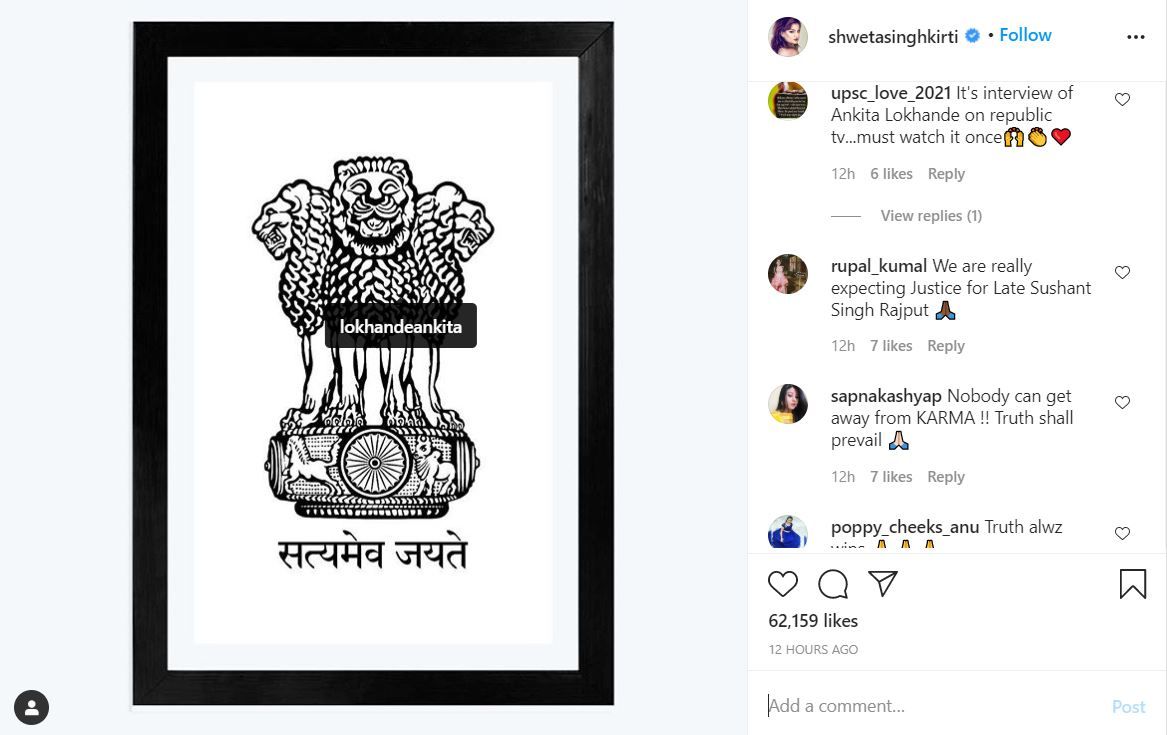 Well said. We all want to know this. Lets keep fighting. They cannot deny our Fundamental rights just like that.#ShameOnMumbaiPolice #ArrestRheaChakraborty #JusticeforSushantSingRajput #NationWantsSushantTruth

He is with u ma'am
And he surrounds us
Czz he is lad of God
And yes truth is on d way pic.twitter.com/b1C1O90F5w

Always love Sushant and miss him forever no one will replace him . Lots of love 4 Sushant . We want justice 4 child of God pic.twitter.com/d54TDMP2FO

WE ALL SSRIANS R WITH U DII
LOTS OF LOVE

TRUTH ALWAYS WIN
WE WILL WIN

WE WILL MAKE IT HAPPEN
SSR WILL GET JUSTICE

Yes mam i have watch it in short clips.. Waiting to watch it with full exclusive at 9 pm.... If sushant not left ankita he will be a unbeatable artist today who knows the balance between work, knowledge and prefer humanity above all, pray 4 ur fmly & fudge

He was hero, He is Hero and he will be Hero. All other fake heroes of Bollywood dies for me now. #ShameOnMumbaiPolice

Sushant Singh Rajput’s sister has been quite active on social media ever since the death of her brother. Several fans of the late actor have been standing beside her in the fight to demand justice for Sushant Singh Rajput. In a recent interview with Arnab Goswami on Republic TV, Sushant Singh Rajput’s ex-girlfriend Ankita Lokhande fervently added that he was 'not the kind of person to take such a drastic step in life'.

Sushant Singh Rajput was found dead in his apartment in Bandra on June 14, 2020. His last film, Dil Bechara alongside Sanjana Sanghi was recently released a few days ago. Rajput shot to fame with the popular TV show, Pavitra Rishta, and then went on to make his Bollywood debut in Kai Po Che that earned him critical acclaim.