Ranveer Singh and Alia Bhatt starrer 'Gully Boy' walked away with 11 awards at a major award ceremony which has upset many fans. Read below for details.

One of the prestigious award shows in the Hindi film industry took place recently which declared Gully Boy to be the biggest winner of the night. The Ranveer Singh starrer film walked away with all the major awards including 19 nominations. The film ended up winning 13 awards making it the highest awarded film by the ceremony ever. But, this has upset many fans over the internet and one of them went on to alter the Wikipedia page of the award ceremony to call Gully Boy's record-breaking award streak as 'Paid'. Check it out below - 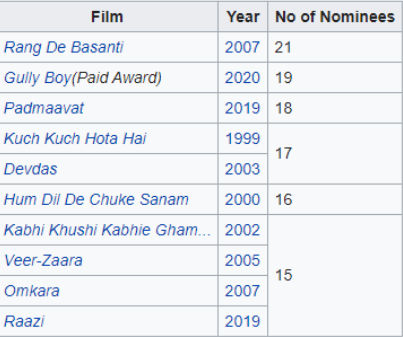 Alia Bhatt and Ranveer Singh walked home with top awards for their performances in the film, whereas Siddhant Chaturvedi and Amruta Subhash also picked up awards for best-supporting actors. Director Zoya Akhtar's win for best director amongst six other wins for Gully Boy has upset fans deeply as they're voicing their opinion about how other deserving films were snubbed from getting recognition. Check out their reactions below -

When i came to know most of the awards were dedicated to #GullyBoy , my expressions were 🤬🤬🤬🤬... shocking to know #Kesari didnt receive a single award.... #FilmfareAward2020, did u get paid from #GullyBoy team? https://t.co/3d8zBPjERz

Dear @filmfare awards today you loose your creditability by choosing #GullyBoy for every awards . Oscar rejected this movie. But you guys don't care about talent and originality of content. pic.twitter.com/bcQNmdBtKH

PEOPLE HAVE PLEDGED SO FAR
5 things Ranveer Singh & Deepika Padukone told us about each other
Rishi Kapoor slapped Ranbir Kapoor when he was a child, find out why?
Ajay Devgn turns 51 today; check out the 'Singham' actor's whopping net worth
Sonam Kapoor's lesser-known songs that you may want to hear now
Swara Bhasker defends celebs posting workout videos; tells questioner to take a hike
DO NOT MISS
PEMA KHANDU ON NATIONAL LOCKDOWN
OWAISI ON NIZAMUDDIN CASE
WATCH: PREGNANCY Q&AS
'NIZAMUDDIN MARKAZ CREATING IMPACT'
HOW ACCURATE ARE TEMPERATURE GUNS?
FANS EXCITED FOR KOHLI-KP TALK