Nushrat Bharucha ended her day 3 of Coronavirus lockdown with a night workout session. Check out the pictures here. Read to know more.

Bollywood actors are keeping their fans updated on how they are spending their time during the lockdown. Social media is playing an important role as several actors are encouraging their fans to stay at home and to do something productive. Nushrat Bharucha is also doing her bit to keep fans entertained, and share all her updates with her fans. Since the gyms are closed, Nushrat Bharucha shared pictures on her Instagram account from her night workout session.

Also Read: Kartik Aaryan's Songs From Nushrat Bharucha Starrer 'Akaash Vani' | How Many Did You Know?

Also Read: Nushrat Bharucha Loves These Salman Khan Starrers; Expressed Wish To Be Part Of Them

Check out the picture posted by Nushrat Bharucha

Many fans commented on this picture saying that Nushrat Bharucha looked beautiful. Some fans also commented with many heart emojis. Check out the comments here. 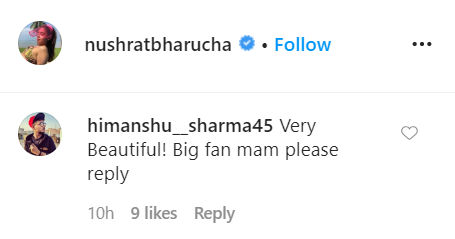 Also Read: Nushrat Bharucha's Foot-tapping Numbers That Can Make You Put On Your Dancing Shoes

PEOPLE HAVE PLEDGED SO FAR
LATEST NEWS
View all
2 hours ago
Kriti Sanon gets poetic with random thoughts amid lockdown, calls herself 'old soul'
2 hours ago
Malaika Arora's stylish house where she is under quarantine with son Arhaan; See pics here
2 hours ago
Raveena Tandon wishes her parents on 54th wedding anniversary, shares throwback pics
3 hours ago
Amitabh Bachchan's on-the-spot invention is 'YOGEN'; here's what it means
55 mins ago
Sonu Sood to Dimple Kapadia's first cook for Twinkle, here are the day's top stories