As the 2014 action film Ek Villain clocked 6 years of release on June 27, lead actors of the film Sidharth Malhotra and Shraddha Kapoor recalled their journey.

As the 2014 action thriller film Ek Villain clocked 6 years of release on June 27, the lead actors of the film Sidharth Malhotra and Shraddha Kapoor recalled their journey. The two actors shared special posts on social media to mark the special milestone. Sidharth shared a video while showcasing his journey in his third film while Shraddha shared several collages of stills from the film that were created by various fan pages of the actress.

Sidharth’s rugged bad-boy look was well appreciated by his fans from all across. Sidharth shared a video that showcased his character of a gangster and his battle to seek revenge for the murder of his lady love which was played by Shraddha Kapoor. While captioning the post, he wrote that as the film clocked 6 years of the release, it brings back several memories from the shooting days which included prepping up for the shoot and much more. Apart from this, even though it was his first film, however, Sidharth wrote that he had so many firsts’ things to witness during the shooting of the film. At last, the Student of the Year actor thanked his fans for their love and support.

Read: Shraddha Kapoor's Ek Villain And Her Other Thriller Films That Show Her Range: Read List

#6YearsOfEkVillain brings back memories of prep & shoot of this film, my 3rd film but had so many firsts for me with an amazing cast n crew. Thank u guys for all the love that u have shown all these yearsðŸ’ªâ¤ï¸A big thank u to @mohit11481 @ShraddhaKapoor @Riteishd @balajimotionpic pic.twitter.com/HbOYqAbTWc

Shraddha who played the role of a chirpy girl in the film shared a series of pictures on her Instagram page which reflected her journey through the film. In the stories she mentioned, “6 years of Ek Villain today. Thank you all so much for the beautiful edits and all the love.” In the second slide on her story, she thanked her fans for showering their love on her character Aisha in the film She expressed her gratitude and wrote that she feels fortunate enough to have essayed such a beautiful character who just spreads happiness and love around. Following her message for the fans, Shraddhashared all the edits that were sent in by her numerous fan clubs which showed several stills from the film to celebrate the anniversary of the film. 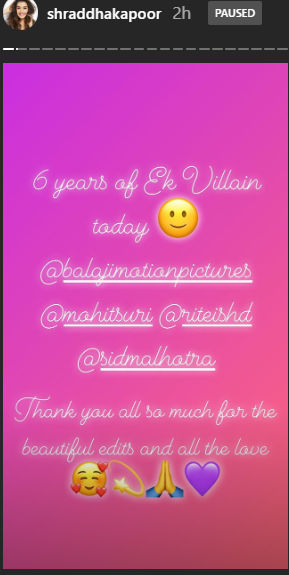 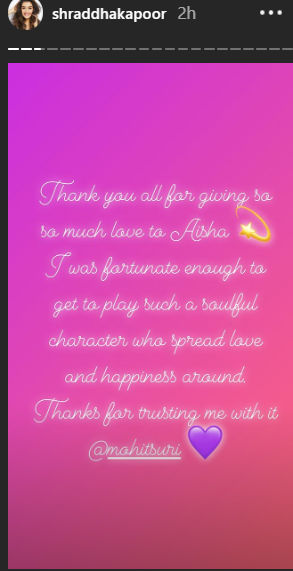 The story of the Mohit Suri directorial film revolves around Guru  (Sidharth) is a gangster whose life changes after he falls in love with Aisha (Shraddha) and decides to mend his ways. When Aisha gets murdered by a serial killer, Guru begins to search for the culprit and seek revenge.