Hrithik Roshan was seen enjoying time with his two sons, Hrehaan and Hridhaan, over lunch. Read on to see the pictures and other details.

Hrithik Roshan is a Bollywood celebrity who has done many films in the film industry. The actor has two kids with his ex-wife, Sussanne. Hrithik Roshan has often been seen posting pictures with his sons whenever they are on an outing. In several interviews, he has been seen talking about his children, their bond with him, and how their relationship is with him. Owing to his fame, the actor's personal life is always under the microscope of his fans and he often keeps his fans posted about his day-to-day life. He recently took to Instagram and posted a couple of pictures with his sons and their friends. Check out the pictures below.

Read | Hrithik Roshan Reveals What He Brings Back From His Travels, Shares Pic From LA Trip

Hrithik Roshan's sons are all smiles: 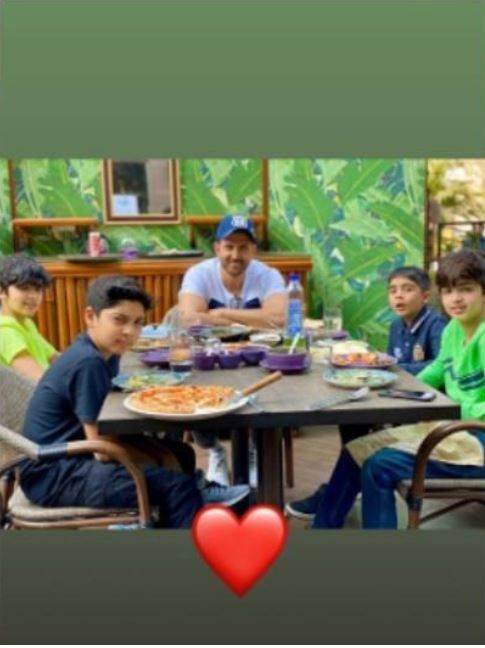 In the story shared by the actor on his social media handle, he was seen out in daylight, enjoying a meal over lunchtime with his two sons, Hridhaan and Hrehaan. Hridhaan and Hrehaan were seen twinning in green coloured t-shirts. While Hrithik seemed delighted to be in the company of his children, the kids in the photographs seemed overjoyed as well. As of 2020, Hrehaan and Hridhaan are fourteen and twelve years of age respectively. The two were born to Hrithik Roshan and his ex-wife, Sussanne.

Hrithik Roshan’s sons can often be seen on his Instagram

On the work front, Hrithik Roshan has had a successful year. He was seen in two movies in the year 2019, Super 30 and War. Both the two were commercially and critically successful. For his upcoming projects, he will be seen in Rakesh Roshan’s film Krrish 4. Krrish 4 is the fourth sequel of the Krrish series and the movie is reportedly in the making.

Read | Hrithik Roshan To Share The Big Screen With Katrina Kaif In 'Krrish 4'?

Read | Hrithik Roshan Fan? Here Are Some Of His Best Songs Which You Cannot Miss