On late versatile actor Irrfan Khan’s 54th birth anniversary, his wife Sutapa Sikdar penned a lengthy post on Facebook. She recalled some old memories of the Hindi Medium actor. Sutapa shared some excerpts from her chats with him while discussing his views on celebrating his birthday. Sutapa revealed that Irrfan didn’t believe in celebrating birthdays and never encouraged anyone to remember his birthday as well. However, she explained why she always celebrated his birthday and used to leave no stone unturned to make it memorable for the actor.

In her post, Sutapa shared one of the actor's conversations with her regarding his views on not celebrating his birthday and wrote,

“You never celebrated your birthday initially to my dismay then reconciliation than just a habit. You used to ask me when you were really young 'why would you celebrate your birthday isn’t it one year less to your death day?' of course these were conversations when you had just ventured out from home from conditioning to exploration so you would question everything.” 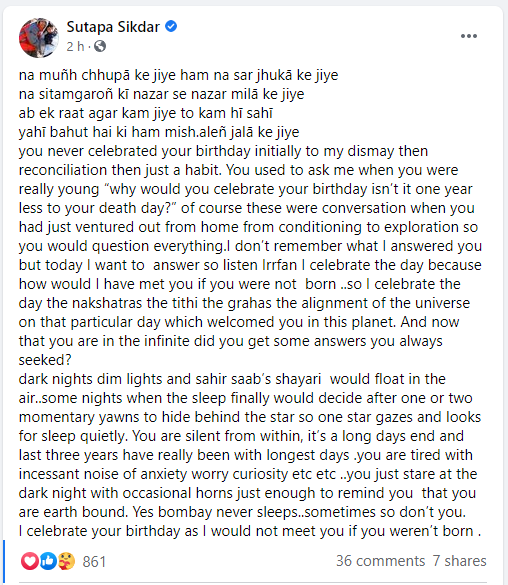 Sutapa gave her reason behind celebrating the special day and wrote that she celebrated to welcome the day when he was sent on the planet and if he was not born then how could the two have ever met. “I celebrate the day because how would I have met you if you were not born ..so I celebrate the day the nakshatras the tithi the grahas the alignment of the universe on that particular day which welcomed you in this planet. And now that you are in the infinite did you get some answers you always seeked?”  Apart from this, Sutapa also shared Irrfan’s birthday schedule and how the latter always celebrated it. Sharing the same with fans, she wrote, “Dark nights dim lights and sahir saab’s shayari would float in the air..some nights when the sleep finally would decide after one or two momentary yawns to hide behind the star so one star gazes and looks for sleep quietly.”

At last, while concluding the post, Sutapa talked about the miseries that the late actor had to go through because of the disease that he was fighting. She explained how the actor was exhausted mentally and physically but still he had spark and will power that pushed him move forward with a smile. “You are silent from within, it’s a long day's end and the last three years have really been with the longest days. You are tired of the incessant noise of anxiety worry curiosity etc..you just stare at the dark night with occasional horns just enough to remind you that you are earthbound. Yes, Bombay never sleeps..sometimes so don’t you. I celebrate your birthday as I would not meet you if you weren’t born.”

Apart from Sutapa, her son Babil also shared a rare video of his father. In the video, the late actor is seen asking about Babil, presumably over a video call and Sutapa starts screaming Babil's name. Later, Irrfan shifts the camera towards Ayaan and asks him to say that they all are missing Babil. Irrfan passed away at the age of 53 in Mumbai's Kokilaben Dhirubhai Ambani Hospital on April 29. He had been battling cancer and his health worsened after a colon infection.