Ira Khan shared three posts with multiple selfies on Instagram, talking about how she has been suffering from insomnia. Here is what Gulshan Devaiah has to say.

Aamir Khan's daughter Ira Khan seems to be spending her time in quarantine but is suffering from insomnia. The actor shared pictures and selfies on her Instagram and talked about how she has become an insomniac. Actor Gulshan Devaiah jumped on the opportunity to give Ira some sound advise.

Confessions of an Insomniac

Ira Khan posted a series of pictures where she can be seen sitting comfortably at her home. She is wearing a black Tshirt. She also posted pictures with her dog. Using hashtags that say bored, 'why don't I just sleep', 'sleep cycle' and 'what is that', she shared that she has been having trouble sleeping.

Ira's friend and actor Gulshan Devaiah took up this opportunity to pull Ira's leg. In the first post shared by Ira, Gulshan commented and advised her to take a cold shower and she might feel sleepy. Ira replied to his comment with an eye-rolling emoji. In the second set on pictures, Ira and Gulshan's friend RJ Alok commented that as Gulshan have said before, she should take a cold shower. 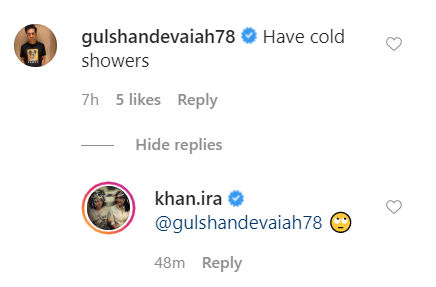 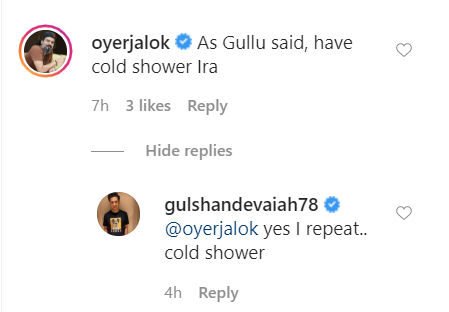 PEOPLE HAVE PLEDGED SO FAR
LATEST NEWS
View all
12 hours ago
Sonu sood's reply to fan calling him 'amitabh bachchan' is winning the internet
11 hours ago
Nupur sanon shares positivity amid lockdown, says 'make your heart beautiful'; see post
9 hours ago
Ileana d'cruz shows how she is 'avoiding people' with a stunning underwater picture