Ira Khan posted pictures of her news muses, Vijay Varma and Gulshan Devaiah, on her Instagram. Vijay said they had washed hands for 20 seconds after the photo

Ira Khan took to her Instagram account recently to post a picture of her new muses. And who would they be but Vijay Varma and Gulshan Devaiah. The two were seen in a comic pose and later, Vijay Varma posted a funny comment. The trio is currently collaborating on a new project which stars the two actors, Gulshan and Vijay.

Ira Khan seems to be working with Gulshan Devaiah and Vikay Varma. Taking to her Instagram, she posted a picture of them captioning it, "My new muses👯". Many commented on the hilarious picture. One of Ira Khan's muses, Vijay himself wrote, "We both washed our hands for 20 seconds after this" in reference to the social distancing prompted by the global Coronavirus outbreak.

Some other celebrities including Gulshan Devaiah has also commented on his hilarious but quirky picture. A friend of Ira Khan has also asked if the latter has found new muses. Take a look: 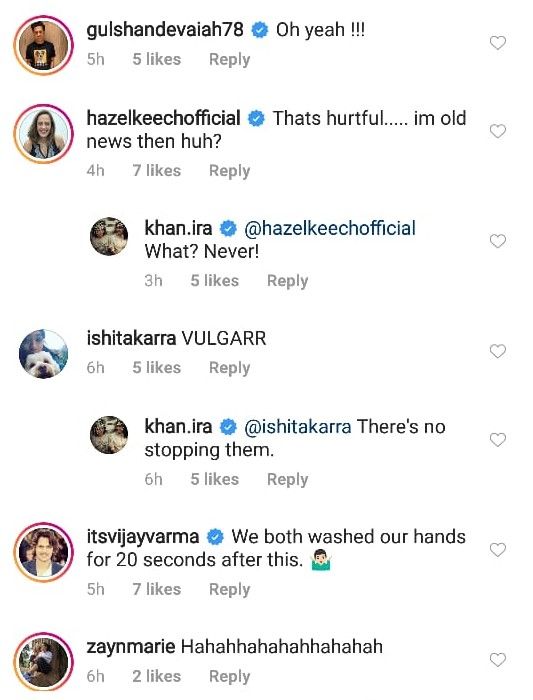 Ira Khan is the daughter of Bollywood actor Aamir Khan with his first wife, Reena Dutt. He also has a son, Junaid, with Reena. Unlike her father, Ira Khan seems to have chosen the role of a director. Last year, she made her debut with the stage production of the Greek tragedy by Euripides, Medea. Her production was called Euripides' Medea. The play starred her brother, Junaid Khan and Hazel Keech.

In other news, Ira Khan also claimed to have been dating Mishaal Kirpalani in an interview with a daily portal. Apart from that, she also made headlines for her gorgeous photoshoot. Here's a sneak peek,

Also Read: Ira Khan Reveals She Has Someone Tattooed On Her Body Twice & It's Not Who You Think It Is