Janhvi Kapoor enjoyed a game night with her sister Khushi and Boney Kapoor at home. The actor exulted over the capture of a 'rare moment' of 'almost winning.'

The COVID-19 lockdown has revealed unseen aspects of the celebrity life. One never thought that pictures and videos of the stars washing dishes, cleaning fans or sweeping the floor would become common. Another highlight of this phase has been how they have also been spending quality time with their near and dear ones.

Apart from usual photographs, an interesting bit has been to see them playing indoor games. The latest family was to so was Janhvi, Khushi and Boney Kapoor. The trio recently enjoyed a game night, as they played cards together.

Janhvi Kapoor posted a photograph of the session on her Instagram stories. The pic might have perhaps not come out of the Kapoor household, but Janhvi was too delighted over the ‘rare moment’ of her ‘almost winning.’ However, no one knows if she indeed won.

READ: Janhvi Kapoor Craves For Cake Right Before Bed, Treats Herself With One In A Goofy Video 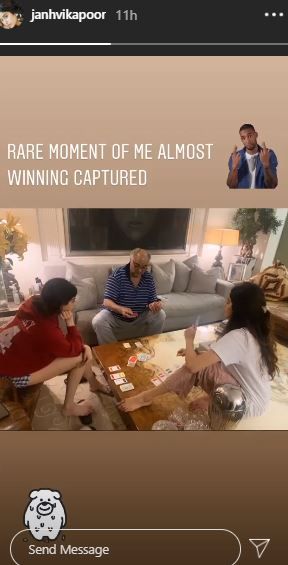 Meamwhile, Janhvi and Khushi has been entertaining their fans with throwback pictures and fun-filled videos. Some of their TikTok videos have been going viral. Janhvi has also baked a cake during the quarantine phase.

On the professional front, Janhvi featured in a segment of Ghost Stories earlier this year. She has multiple films in her kitty, like Gunjan Saxena: The Kargil, Roohi Afzana, Takht. Out of which Gunjan Saxena was gearing up for release around this time.

However, with the COVID-19 pandemic, not just that film, but the entire line-up of releases is likely to get delayed. The stars of the film star, meanwhile, have been doing their bit by donating to relief funds and featuring in informational campaigns.

READ: When Alaya F Revealed That She Had More Followers Than Janhvi Kapoor Before 'Dhadak'