Janhvi Kapoor took to Instagram to share pictures of her indulging in a delicious looking meal and bearing the consequences of it. Take a look at the post.

Gunjan Saxena: The Kargil Girl actor Janhvi Kapoor took to Instagram on Monday, February 01, 2021, to share pictures of her indulging in a delicious meal and bearing the consequences of it. Along with the picture, the actor penned a caption as she went on to describe it. Her post was soon filled with comments from fans who were gushing over her pictures.

Taking to her Instagram handle, Janhvi Kapoor went on to share pictures of her that are truly unmissable as she bears the costs of enjoying a delicious meal. In the first picture, the actor can be seen striking a pose for the camera as she devours some yummy looking pasta. In the second picture, Janhvi Kapoor can be seen struggling to fit into her outfit for an event. One can notice her team trying to fit her into the sequenced silver outfit. She can also be seen opting for a middle parting sleek hairdo, well-done brows, kohled eyes and brownish lips.

Along with the picture, Janhvi Kapoor went on to pen a caption for the post. She wrote, “before and after”. Take a look at Janhvi Kapoor's Instagram post below.

As soon as Janhvi Kapoor shared the post online, fans went on to flood the comment section. Some users could not stop gushing over how stunning the actor looks despite her mishap, while the others were left in splits after seeing this post. One of the users wrote, “IDC, you look absolutely stunning”. While the other one wrote, “such a diva”. Check out a few more comments below. 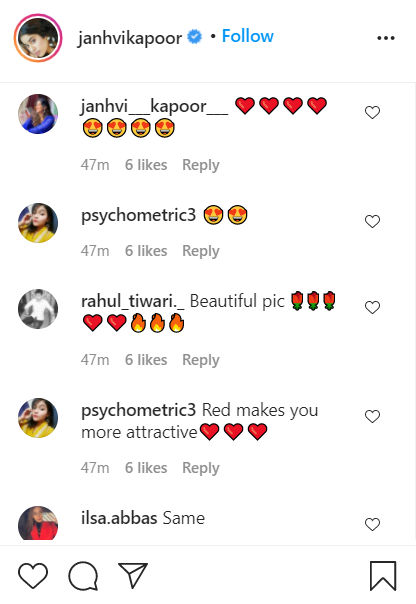 Janhvi is an active social media user and often shares pictures, videos, stories and more giving fans a glimpse of her life. Earlier, the actor gave fans a sneak peek into how she works at home. In the pictures, Janhvi Kapoor can be seen sitting in front of the laptop holding her cup of coffee. However, one can also notice how tired she looks as she goes on to give an eye roll. She wrote, “Work from home they said. It’ll be fun they said”. Take a look at the post below.