Janhvi Kapoor has been trying her hand on some experimental cooking these days. This time, the actor tried to create a new dish, which was rejected by Khushi.

Bollywood celebrities have been entertaining their fans constantly with their social media presence amid lockdown. Be it workout or cooking, celebrity fraternity has been seen performing some never-seen-before kind of tasks for their fans. Recently, Janhvi Kapoor decided to try some experimental cooking that received a ‘subtle rejection’ from her sister Khushi Kapoor.

Janhavi Kapoor shared an Instagram story where she is seen making her sister try her newest food innovation that is a banana with toffee sauce. Janhvi’s sister is seen tasting it and giving a nod so as to say she likes it, while Janhvi is impatiently seen asking her again if she really liked it. However, Khushi Kapoor is heard saying, “Can you give me some plain banana”.  Janhvi captioned the video as 'Subtle rejection of my banana with toffee sauce.' 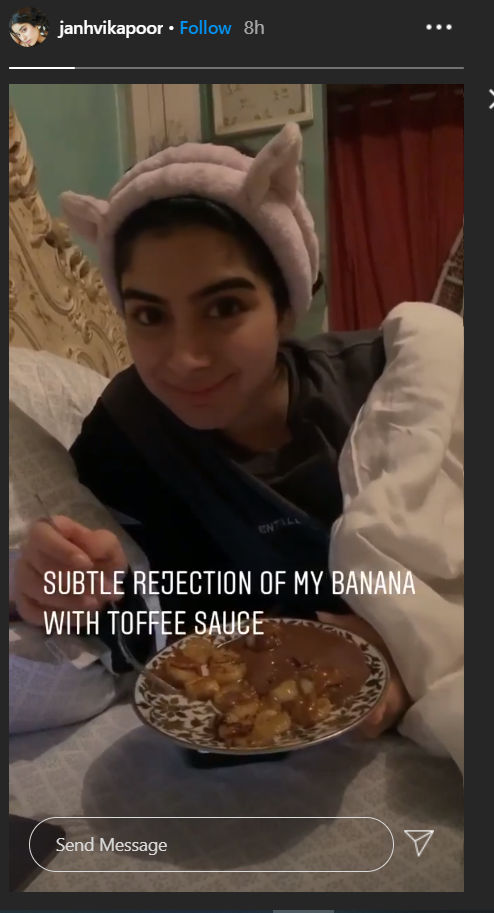 Recently Janhvi Kapoor took to Instagram to share a picture of herself from one of her photoshoots. She can be seen lying down on the grass. She is wearing a stunning bright yellow long centre-slit top with puffed sleeves. Janhvi Kapoor paired her top with white sequinned bottoms that gave the whole ensemble a subtle yet glam look at the same time.

Janhvi shared the picture and wrote in the caption that her dreams look like the picture she shared. The actor also added the hashtags of ‘Throwback Tuesday’ along with one that says ‘The Great Outdoors’. It seems that the actor is missing going out and experiencing the world. Fashion designer Manish Malhotra commented 'Switzerland Memories' on the post. Photographer Hardik Mehta claimed that the picture reminded him of the movie Dil Hai Ki Maanta Nahi.

PEOPLE HAVE PLEDGED SO FAR
LATEST NEWS
View all
10 hours ago
Amitabh Bachchan reflects on lockdown, says 'it has taught more than my life of 78 years'
10 hours ago
Varun Dhawan celebrates niece Niyara Dhawan’s birthday amid lockdown
9 hours ago
From a salute to Sonu to 'Boycott China'; Here's Entertainment news recap of the day
6 hours ago
'From Sara ka Sara to Sara ka aadha': 'Kedarnath' actor shows transformation in a video
10 hours ago
Sutapa Sikdar puts up heartfelt note mourning one month of Irrfan Khan's sad demise