Kajol took to Instagram recently to convey a quirky yet important message through the popular "poem of the day" format on social media. Read ahead to know.

Kajol recently shared a post on her Instagram stories that caught her fans' attention. The actor shared a lockdown based poem trying to convey her thoughts through the post. This post by Kajol was found to be hilarious by her fans who follow her on social media.

Also Read | Kajol Devgn Has Starred In Several Family Dramas, How Many Have You Watched?

Kajol’s Instagram is filled with quirky and hilarious posts that the actor often posts on her page. She is known to be one of the most bankable stars in Bollywood. On social media, Kajol tries to keep things cool and casual with her posts. In a recent post shared by the actor, she tried to convey the feeling of being in a state of lockdown through a popular meme related poem format. 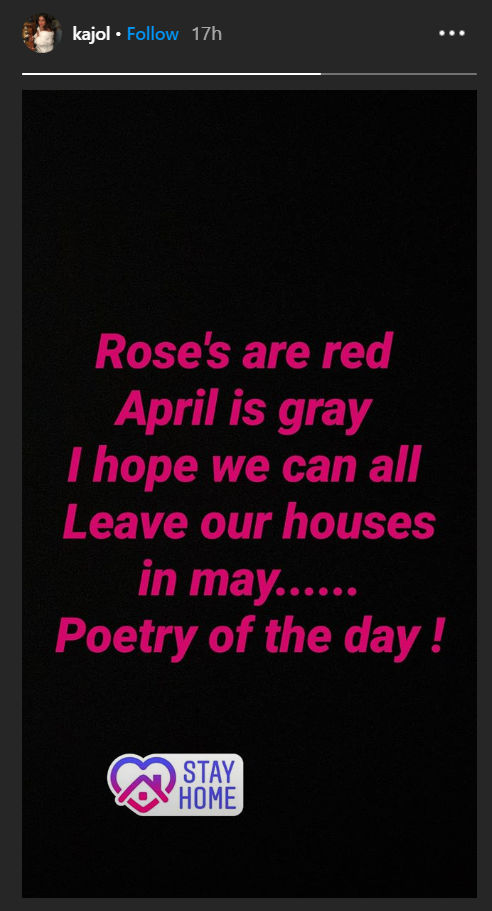 The actor on her Instagram story wrote about how the month of April has been grey for everyone. In the poem shared, she also mentioned her wish to be able to get out of her home in the month of May at least. Towards the end, Kajol ended the poem by saying that this was her poem of the day. Fans of Kajol found this post to be hilarious and couldn’t help but appreciate what the actor was trying to convey through the hilarious poem.

On the work front, Kajol was last seen in Tanhaji: The Unsung Warrior opposite husband Ajay Devgn. The film was a roaring success and was loved by the audience and critics alike. The audience especially loved to see the chemistry between Ajay and Kajol on screen and therefore the couple received tremendous praise. Kajol was also seen in Devi, a short film, for which she garnered tremendous praise from netizens and several critics who absolutely loved the film, according to a news portal.

PEOPLE HAVE PLEDGED SO FAR
LATEST NEWS
View all
1 hour ago
Abhishek Bachchan's pics with Amitabh Bachchan & Jaya Bachchan are just adorable
1 hour ago
Anupam Kher celebrates 39 years in entertainment industry, launches his own website
2 hours ago
Ananya Panday joins Bhumi Pednekar's 'One Wish For The Earth' campaign
2 mins ago
Varun Dhawan shares a mesmerizing view of how his surrounding looks like during monsoons
55 mins ago
Abhishek Bachchan issues a 'Nisarga' warning to Mumbaikars about situation getting worse