Kangana Ranaut Has Evolved Her Fashion Game Over The Years; Details Here

Kangana Ranaut started her Bollywood career in 2006 and since then seems to have come a long way with her fashion choice. Read on to know more about her journey

Kangana Ranaut is known in Bollywood for her acting skills. While she has veritably evolved as an actor since her debut film, Gangster (2006), Kangana's fashion game and looks have also undergone a huge visible change. Here is a timeline of Kangana's fashion looks and how it changed over the years:

Kangana Ranaut made her debut in 2006 with Anurag Basu's Gangster. She used to look radically different from what she looks now. Kangana had long, voluminous curls and was often spotted in casuals. Her wardrobe mostly consisted of dresses and denim.

This year, Kangana Ranaut starred in Once Upon a Time in Mumbai. The year is all about glitters and shimmer in the fashion world, and Kangana too was spotted in such styles. She had sported a metallic gold dress with a headband. The whole look was a blend of high fashion. Keeping with the trend, Kangana sported many such bling outfits.

Also Read: Kangana Ranaut-starrer Panga's New Still Is Out And The Actors Are All Smiles

Also Read: Kangana Ranaut Fan? Here Are Some Best Songs Of The Actor Which You Cannot Miss

Four years hence, Kangana Ranaut evolved her fashion game and seemed to have earned the label of a star beside that of an actor. She was reportedly a part of many fashion campaigns, launches, and fashion shows. Fashion critics also reportedly praised her fashion game. She was seen sporting high fashion clothes like a black dress with feather details.

Also Read: How Kangana Ranaut Fared At The Bollywood Box Office In 2019

Ever since then, Kangana Ranaut has visibly experimented with her fashion. She had chopped off her curly locks to a shorter pixie cut. She is seen sporting ethnic wear more than western outfits. Kangana also fares as a saree lover, wearing the six-yards even when she is travelling. 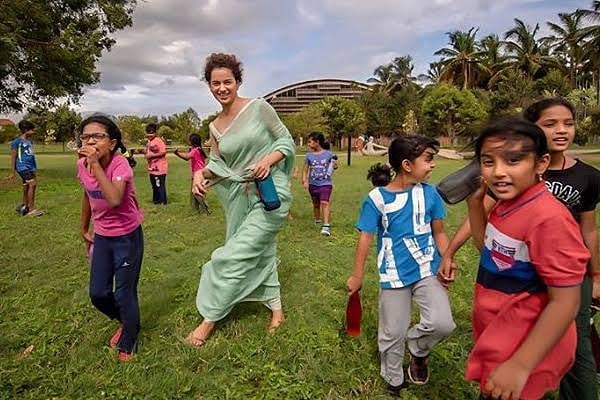 Also Read: Kangana Ranaut: The Best Makeup Looks Of The Queen From 2019