Since the demise of veteran actor Rishi Kapoor, actress Kareena Kapoor is walking down the memory lane and has been treating fans with several vintage pictures.

Since the demise of veteran actor Rishi Kapoor, actress Kareena Kapoor is walking down the memory lane and has been treating fans with several vintage pictures. Adding a new one from her archives, Kareena shared another remembering her "Chintu uncle''. Kareena, who has been sharing tribute posts for Rishi Kapoor on Instagram, picked a priceless monochrome throwback picture of the Bobby actor, her father Randhir Kapoor, mother Babita, and late music director R D Burman and described how important they are in her life.

The Good Newwz actress took to her Instagram page and shared the amazing memory with her fans. In the old picture which features Randhir, Rishi Kapoor, music legend R D Burman who can be seen holding Babita's hand as they all happily pose for the camera. Kareena defined the bond she shares with her family members in just one word, "Irreplaceable" as she captioned the memorable picture. As soon as Kareena shared the picture, Rishi's wife Neetu was the first one to pour in her heart over the throwback picture which is just speaking volumes. Followed by Neetu, was an ace fashion designer, Manish Malhotra, and Poonam Damania who were also completely in awe of the picture.

Read: Kareena Kapoor Khan's Workout Video Will Motivate You To Sweat It Out At Home; Watch 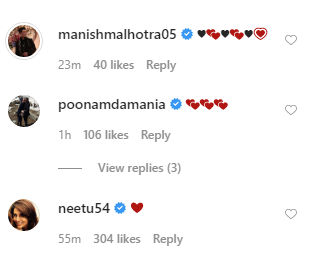 R D Burman was like family to the Kapoors, especially to Rishi Kapoor. Pancham, as R D Burman was fondly called by his friends, composed music for Rishi Kapoor in several of his films, including Zehreela Insaan and Khel Khel Mein. His song Khullam Khulla Pyar from Khel Khel Mein became an instant hit, just like Dil Lena Khel Hai Dildar Ka and Hoga Tumse Pyaara Kaun from Zamaane Ko Dikhana Hai, Saagar Kinare and Saagar Jaisi Aankhonwali from Saagar and Chalo Kahin Aur Chalte Hain from Naya Daur. Gurudev was the last film that R D Burman and Rishi Kapoor did together.