Kartik Aaryan shared a dreamy picture on his Instagram with a hilarious caption that will leave his fans in splits where he compared himself with a "bua."

Kartik Aaryan, who has created his own niche, is quite active on social media while sharing updates of his quarantine period. Recently, the actor shared a dreamy picture on his Instagram with a hilarious caption that will leave his fans in splits. In the picture, the actor can be seen clicking pictures of the cloudy weather while comparing himself with a “bua.” Donning a beautiful smile with that messy hairstyle, Kartik Aaryan is leaving the hearts flutter with his looks. In the caption, the Love Aajkal 2 actor calls himself a 'bua' of any family who needs to click the sky every time when it is cloudy outside.

Several fans of the actor were quick enough to leave a comment under the hilarious post of Kartik. One of the users wrote that these days the sky and weather is such that people easily get tempted to click the pictures. Another user expressed her obsession with clicking pictures of the sky and wrote that she likes to click pictures of the weather when it is pleasant outside. Another user playfully commented and wished that every family should get such a handsome bua. A fourth user chimed in and asked Kartik about the new episodes of his homemade series Koki Poochega. The user commented that it is almost four days that the actor has dropped in another episode of his much-loved series. 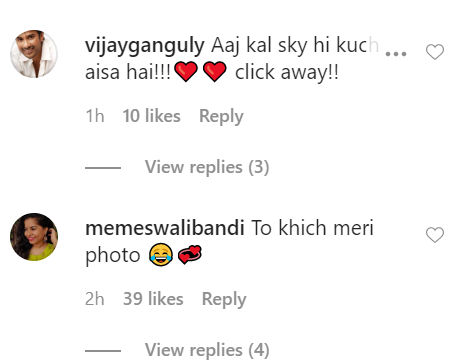 Meanwhile, on the work front, Actor Kartik Aaryan's action film with director Om Raut has been put on hold as the makers want to shoot the film abroad, which won't be possible for some time amid the coronavirus pandemic. The 3D action film, produced by Bhushan Kumar's T-Series, was to be shot in India and various locations abroad. However, the makers have decided to take up the project at a later date. "We are doing it (film) later. It is on hold because the film involves a lot of foreign shoots and we can't shoot abroad. The team was to shoot in Hong Kong but it can't happen due to coronavirus. We are figuring out what to do. There were other places also. It is a cutting edge action film," a source close to the film told PTI.

LATEST NEWS
View all
1 hour ago
Kunal Kapoor talks about nepotism in Bollywood, says 'people interested in merit'
1 hour ago
Fan tells Kartik Aaryan she called him, actor reacts with a hilarious comment
2 hours ago
Kangana Ranaut claps back at Kubbra Sait who showed support to suspend her Twitter handle
1 hour ago
Check out the net worth of the actors in the upcoming film 'Gunjan Saxena'; Details inside
14 mins ago
Madhuri Dixit Nene answers interesting fan questions as she completes 36-yrs in Bollywood