Kartik Aaryan is one of the most popular young actors today and one of his fan pages posted a video of him, posing for a picture with a female fan. See it here

Kartik Aaryan rose to fame with his stint in Sonu Ke Titu Ki Sweety and hasn't looked back ever since. The Pati Patni Aur Woh star has built a massive fan following in a very short span of time, with his fans wishing for just one glimpse of him. Kartik recently met a few fans on his film's set, where he obliged for a picture with them, but keeping social distancing in mind. Read on to know more about it.

Luka Chuppi actor Kartik Aaryan is one of the most popular young actors in the country today and enjoys a huge fan following. He has a number of fan accounts on Instagram, one of which posted a video of him, where he obliged for a picture with a fan but kept social distancing norms in mind. His fan page @kartikaaryan_wellwishers shared an unseen video from one of Kartik's film sets, where he could be seen in a casual avatar, and smiling while posing with a female fan. The two of them maintained a safe distance while taking the picture, while people in the background shared a laugh. You can see the video here.

Kartik Aaryan's Instagram account has a following of almost 20 million people and the star doesn't disappoint his fans and posts glimpses from his daily life, workouts, photoshoots, and vacations pretty frequently. Recently, he took to the social networking site and posted a monochrome picture which made his fans go gaga over him. He captioned it, "Hair aur tooth paste ka toh ad kar hi sakta hu. Kya bolte ho ðŸ¤·ðŸ»‍â™€ï¸" In the black and white image, the actor can be seen striking a pose and is all smiles for the camera. He can be seen donning a printed black t-shirt. One can also notice the actor’s sparkling teeth and disheveled hair in the photo as well. You can see his Instagram post here.

His fans bombarded the comments section with compliments for the young actor. While one fan wrote, "Omggg hotnesss!!ðŸ”¥ðŸ”¥ðŸ”¥", while another commented saying, "uff aapki yeh smile". The monochrome picture received more than 770k likes within a few hours. You can see some of the comments here. 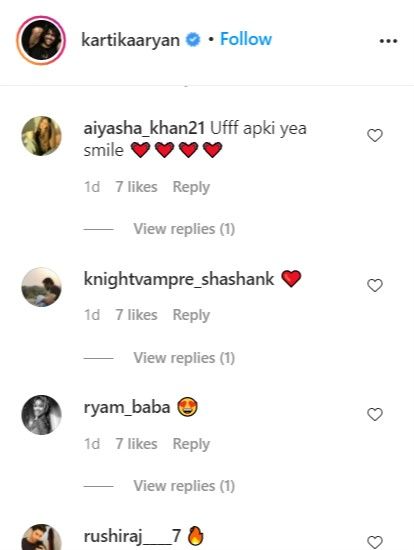