Kartik Aaryan shared an intense picture of himself during the lockdown. While fans are loving his new fans avatar he also gets some funny reply, read here.

Kartik Aaryan is keeping his fans updated about how he has been spending his time during the lockdown. He has been sharing pictures of his new look where he can be seen in a beard. And seems like the actor is liking his new look, as per his recent picture.

The Pati Patni aur Woh actor recently took to his Instagram handle to share a picture of himself during the lockdown. In the picture posted by the actor, one can see him posing giving his side profile look with a pair of spectacles. But the actor looks different as he can be seen with a full-grown beard and messy hair.

Along with the picture, Kartik Aaryan went on to write saying “Kaise shave kar dun yaar? Yeh bhi sexy kam nahi hai.” (How am I supposed to shave? This look is also not that bad). Check out the post below.

Seeing this avatar of Kartik Aaryan fans were amazed as they went on to express their look on the comment section. One of his fans told him not to shave. While another fan said “Ooh bhai saasta kabir singh.” Check out a few comments by fans below. 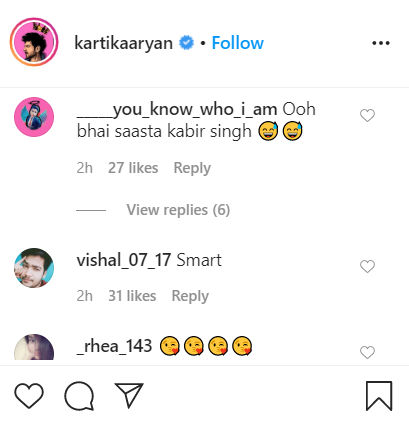 The actor recently featured in the song, Muskurayega India. The song was released on April 06, 2020, and went on to receive praise and also become an instant hit. The song also features Akshay Kumar, Tiger Shroff, Ayushmann Khurrana, Kriti Sanon, Vicky Kaushal and many more. The song talks about fighting the current condition as one family and rises together to a happy beginning. Watch the video below.

Also read | Kartik Aaryan Thinks His Beard Is 'too Sexy' To Get Shaved; See Pic Inside

Also read | Kartik Aaryan To Step Into Allu Arjun's Shoes In Hindi Remake Of Ala Vaikunthapurramuloo?